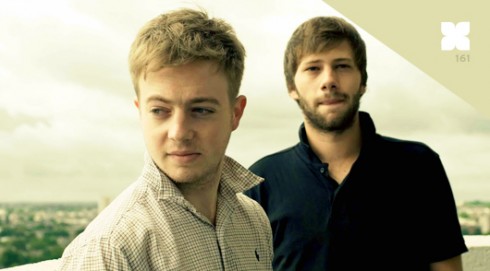 More fire from the XLR8R camp, this time Mount Kimbie step up to the plate for the latest in the podcast series:

Since quietly dropping a couple of EPs on Hotflush Recordings last year, UK duo Mount Kimbie has shot into the stratosphere, as its recently released debut album, Crooks and Lovers, has taken the whole post-dubstep-future-bass-whatever-it’s-called continuum to a whole new audience. Perhaps it’s the inclusion of field recordings and other organic sounds, or maybe it’s the palpable sense of melancholy in their songs, but the youthful pair has folks practically salivating over their maiden journey to North America, which begins this Friday with a performance at Seattle’s Decibel Festival. Over the course of the following week, Dominic Maker and Kai Campos will trek across the continent before heading back across the pond; a full list of tour dates is here. To celebrate their touchdown on American shores, the boys have assembled this exclusive mix for theXLR8R podcast series. Much like their own music, the mix finds the guys dabbling in dancefloor sonics, but the duo never abandons its love of woozy low-end hum and experimental wanderlust—not that we’d want them to.