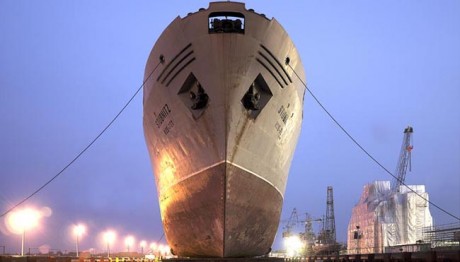 Having previously written about the initial lineup and the release of weekend tickets, Bloc hit us with a fresh release of news today – We’ll go through this in 4 parts:

The Motor Ship Stubnitz is a deep-sea fishing vessel that belonged to the German Democratic Republic before the collapse of Communism. She is 80 metres in length and weighs 2,541tonnes. A team of forward-thinking artists and engineers have converted it into a moving platform for the sonic and visual arts.

Watch the video above to learn the history behind this mammoth beast and get a sneak peek at the inside, where all the Bloc ravers will be. To say we’re excited about this one is an understatement.

Ray Keith, Ceephax Acid Crew, DMX Krew and Nathan Fake will all be performing on a waltzer right next to the battleship above in the heart of London’d Docklands. Yeah?

Mr Jenkinson has been a firm favourite and part of the Bloc family since the very first day and he returns in 2012 with a literal interpretation of his Waltzer label. A fusion of techno, gabber, electro, acid and disco is going to cause few casualties (on the dance floor).

Until this year, Arpanet, Heinrich Mueller and Nhan Le Thi have only appeared live on stage once before. Their legacy kept alive with a slew of releases (mainly on Rephlex), will be brought to the forefront with a live performance which promises their own visuals and exclusive material. Looking forward to what promises to be a special coup for Bloc.

4. How will Bloc use The London Pleasure Gardens?

The London Pleasure Gardens is a 60,000 square metre site of old Victorian Docklands. Bloc will be utilising some of the temporary structures, but the Gardens themselves come with two, permanently installed nightclub venues. The majority of the venues are located on the water’s edge.

The main stage for this year’s Bloc is a monolithic auditorium – encased by a ring of steel shipping containers. The largest of the installed structures at the LPG’s is The Hub. The design will be familiar to those of you have been to Glastonbury, the main stage at the Shangri-La area of the festival. That concept has been developed upon to create a vast indoor space that will be the second largest on-site.

Next to The Hub is the Dome stage. An acoustically treated, 30 metre dome presents the DJs to the crowd as they play from the middle under an immense amount of lights and lasers.

All these spaces – including the main stage – are covered and soundproofed.

Tickets are till available, grab yours now and keep up to date with happens on the Bloc Facebook page and Twitter.

The 6th and 7th of July can’t come soon enough. Who’s going? Leave a comment in the box below with who you’re most looking forward to seeing.