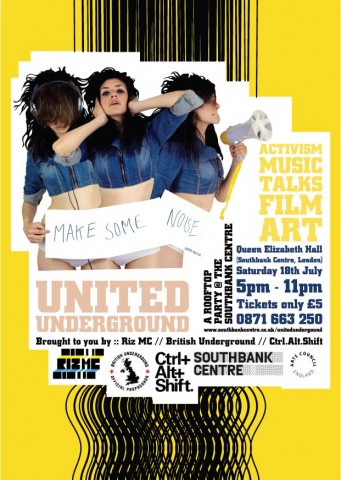 A rooftop party at the Southbank Centre.

You don’t have to leave London for a summer festival experience. Across the spaces of Southbank Centre’s Queen Elizabeth Hall – including the re-opening of the roof as a venue space – hosted by Ctrl.Alt.Shift, British Underground, Southbank Centre and actor and musician Riz Ahmed/ Riz MC, United Underground is a unique mix of cutting-edge street culture, music, artwork, fanzines and film set against a backdrop of new-school activism.

The event has been specifically created to promote active engagement with new music and its potential as a catalyst for change.

What’s happening where?
On The Roof will be some of London’s hotly tipped live acts, and best-loved underground club nights. We will also present an impressive lineup of speakers from across the cultural and campaigning spectrum, talking activism and their way of doing it – from film director Peter Kosminsky, gay rights campaigners from Baghdad, to Plane Stupid.

The Front Room at Queen Elizabeth Hall will showcase a buzzing lineup of new short film talent gathered by Film London talent spotters, plus feature films from Andy Serkis and Eran Creevey in the Purcell Room. Also in the Front Room, Ctrl.Alt.Shift will be putting together a fanzine, in real time, documenting the night – with contributions from punters (pics taken on your phone, blogs, poetry) as well as pre-sourced contributions from activists and artists.

This is a not-for-profit event. The idea is to showcase creative talent, throw an eclectic party, and encourage participation in fresh ways.

Confirmed Speakers discussing why they bother, and how:

Reprieve
Reprieve uses the law to enforce the human rights of prisoners, from death row to Guantánamo Bay. Their current ZerodB campaign opposes the use of music as torture.

Ali Alizadeh
Speaking about Iran’s protests and the opportunity and limits of new media in direct action.

London 4 London
A brave city wide initiative where all clubbers donate £1 to charity on October 3rd – the founders talk about how they’re taking action.

London Coalition Against Poverty
Mixing case work with direct action and fighting for the housing rights of London’s poor.

Tom Dale
He was a human shield in Gaza and witnesses the killing of his friends, now he organises exploited call centre workers into unions.

Films curated by Mia Bays, Film London
Including holy tipped short films, music videos from up coming talent, and feature films RENDITION, and THE AGE OF STUPID. Plus shorts from Ctrl.Alt.Shift.

Ctrl.Alt.Shift is an experimental initiative engaging a new generation of activists for social justice and global change. www.ctrlaltshift.co.uk

Southbank Centre is the UK’s largest arts centre, occupying a 21-acre site that sits in the midst of London’s most vibrant cultural quarter on the South Bank of the Thames. The site has an extraordinary creative and architectural history stretching back to the 1951 Festival of Britain.