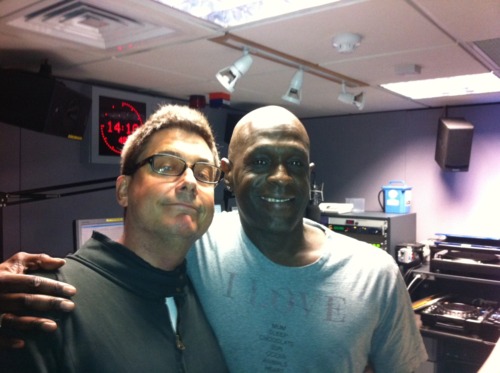 The ‘Fifteen Years of Hospital Records‘ album is out now and there’s a big Hospitality in Birmingham on the second. Both largely feature Cyantific.

Tony Colman (in pic with Fabio) spoke at length.

Damian Bennett: Looking back at the history of your label, what was the instant that you felt that you were onto something right?

TC: NHS7 ‘Song In The Key Of Knife’. That tune changed everything. It made us believe in ourselves, and it made others take notice.

DB: How does the comp make you reflect on times and how things have changed?

TC: Each track on there has proud memories attached. In the early days of the label we were hand to mouth: each release paid for the next one, so the hunger factor was very high indeed.

We never had any bank loans or support from anyone. It was a scary time and a risky time but looking back on it the excitement was incredible… to hear Fabio or Grooverider play one of your tunes back then was massive, the rush you got, because it was so important; internet radio was in it’s infancy, podcasting and downloads did not exist, nor did 1xtra, so for D&B they were the outlet.

Hospital now is very different, we have 10 staff as opposed to just Chris and me doing everything. So every early release was a clearly defined step along the way.

DB: Your identity, your design and marketing for eg has always been very very bang on… how do you approach this day to day?

TC: It has always been this way. When we released NHS1 and NHS2, Chris and I handmade the promo mailers to send the hand-stamped records to DJs. We branded everything. by hand. We wanted the label to look and feel like a small town pharmacy… we even sourced our 12″ bag stickers from the same company that provided pharmacy stickers to the local chemist in Tottenham down the road from my house. Nothing has changed really, we still do a lot by hand, and we still use the same stickers!

Chris is from a design background, so he’s always been fanatical about the design aspect of the label. I can’t event write legibly, so my design input tends to be on broad concepts and names.

DB: You personally were in a band before the label, tell me more?

TC: I used to have a funk/acid jazz back called IZIT. We did 5 albums, we charted in the UK and Japan and it was like a career in itself. I’m v proud of the band & I’ve only recently converted a load of old VHS footage to digital so you can expect me to bore the pants off my 7 loyal blog readers with it on londonelektricity.com soon!

DB: The unreleased span of tunes makes for interesting listening, some great collisions, variations, people like SPY next to Camo & Krooked, Reso…

… next to an Adele remix, Fred V next to Blokhe4d, next to Muffler… it reminds you what a random ‘gang’ it always is on your label.

TC: I’m glad you see it that way. The last thing we want is for all our artists to sound homogenous. We sign artists who have their own sound, and who may not fit the preconception of Hospital, but who will help change the shape of Hospital over the years. We never like to stand still. 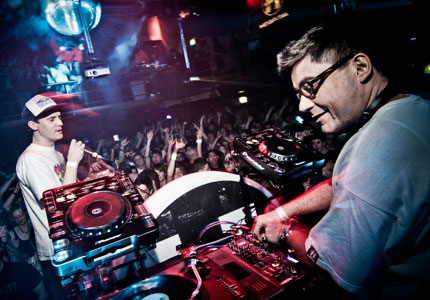 DB: Love the Reso tune btw. What new people are you checking?

DB: Back to the label there’s got to be some rugged stories from the Hospital vaults?

OK… well, eating a cold boiled sheep’s head in a drive through burger shop after DJing in Reykjavik was pretty memorable. I had told the promoters before the show while we were bathing in a hot spring that I always like to eat local delicacies, but I never bargained for that.

It was actually surprisingly tasty.

My favourite ever US show was in Denver, Colorado. The promoter lost his venue a few days before I arrived so he struck a deal with a ten pin bowling alley and took in a sound system. One of the most bizarre and fun gigs ever… the decks were set up by the burger stall and I had a crowd brocking out in front of me while ravers and bemused regular bowlers played the lanes on each side.

DB: And you saw Led Zep I believe?

TC: Yes I was there. Zeppelin played a 3 hour set and it was stunning. It was, I think, the first ever live gig to feature live projection cameras in a festival, and thank god they did it otherwise there would be no live footage.

DB: Lastly: what’s some basic words for anyone looking to start up a label?

TC: Hard graft. Choose a concept that is unique and stick to it. Know your onions. Be yourselves.

Aim to build your own niche, not try to slot in with an existing one.