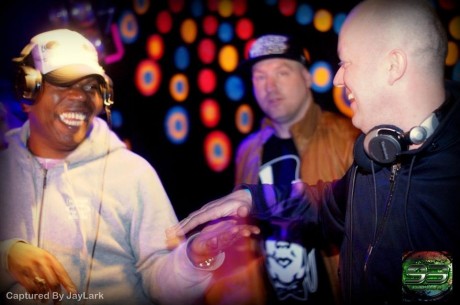 Birmingham has a rich history when it comes to D&B and they love their old skool jungle. I caught up with DJ and mastermind behind the ’93’ banner Tim Ryan (right, with Randall) who gave us an overview on Birmingham’s two-decade-strong love affair with this music. you can check out his Summer Vibes mix.

DB: As a DJ yourself and under the ’93’ banner what is your style and preference of music?

TR: At the moment I play mainly oldskool 91/92-era jungle techno/jungle 93/97 era & upfront jungle. Last year I took the plunge & brought some pioneer CDJs as every club you played at never had any decent 1210’s or just none at all, although I still love my vinyl. CDs are far clearer to play, less baggage to carry around with you & are excellent for production as you can pretty much make a tune that day & play it at an event that night.

DB: At a glance of your flyers for events you’re involved with there’s names like Randall, Kenny Ken, Brockie plus you are part of a huge night soon featuring Vapour and Doc Scott (details at end)… so in general what sort of music is being played?

TR: New Skool jungle is back for years it’s been DnB & Jump up but now jungle. Seems to be back in fashion with a different blend of people, you’ve got the people in their late 30’s/early 40’s who were there back in the day like me still going out, but also a much younger crowd 18-25’s & students & always mainly trouble-free these days.

DB: What are two fave tunes you would cite that you feel sum up the ’93’ vibe?

… and Xlr8 ‘What’s My Code’. These tunes were hammered back in the day & just instantly bring a smile to my face whenever I hear them.

DB: You are a busy man when it comes to the jungle promotions front too…

TR: Yeah very busy at the moment. I run Raiders aka Raiders of the Oldskool. We do events mainly in Birmingham & Midlands playing oldskool/jungle/D&B. We also host ‘room 2s’ at bigger events last year we did Amazon vs Jungle Fever at the Rainbow Warehouse in Birmingham. Dale otherwise known as Dash Board looks after the internet radio site.

This year I’ve ticked some major boxes: I played in Ireland in April alongside Ratty & Tango with my good friend Darren Dee AKA Mr Dee. I’m also playing in Bremen Germany in July with DJ Alpha/Marga Mc/Gav. Also I’ve always wanted to play at a festival so this year I’ve been asked to play at Shrewsbury Fields Festival in the liquid D&B tent. I’m also producing my own jungle tunes working alongside Alpha. We have some tracks played out by Kenny Ken/Bladerunner & Nicky Blackmarket, with some new releases on the horizon.

TR: Tony DeVit RIP was an absolute legend I was lucky to see him play a couple of times in Birmingham during the nineties. He also made some classic tunes & ‘The Dawn’ comes to mind.

Birmingham was massive for jungle during the 1990s most of the big name DJs in the game were from London but spent every weekend in Birmingham, the likes of Fabio, Grooverider, Jumpin Jack Frost, DJ Rap to name a few. Micky Finn has been a favourite up here & think he’s got a soft spot for us Brummies too, his sets over the years with Lenni & Bassman are legendary. I really do think Birmingham helped put Micky Finn right up there on the map.

DB: And venues? What venues in Birmingham are known for this music in the past?

TR: The Q Club is still there. It has been closing down for the past few years at one point was going to be converted into flats but thank god it hasn’t, it is truly a remarkable venue: the last Flashback events there have been legendary. 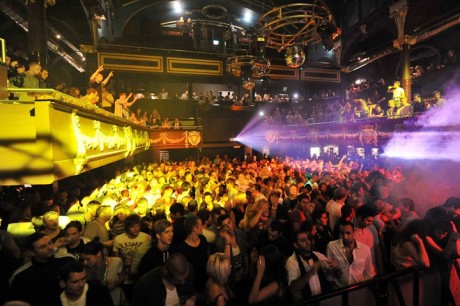 One of my favourite venues is the Institute in Digbeth Birmingham, I can’t name a big DJ that hasn’t played there over the years. My first experience there was May 1993 at Pandemonium Andromeda 5. Pandemonium was my old stomping ground. The Hummingbird was also a great venue it has recently changed its name to the Academy but unfortunately they have closed down they used to have many raves there back in the day… the one that comes mind were the Dance Planet Raves again legendary.

Others that I can remember are Coast 2 Coast, Branstons which hosted events such as Flashback, Wobble & Crunch. Also going back a bit further the old Rag Market used to hold massive raves. I know it’s not in Birmingham but I have to mention The Eclipse in Coventry which has sadly now gone I think it’s now become a car park maybe? I could be wrong but that is up there with the best of them.

DB: So what is firing now?

TR: The Rainbow Warehouse, The Custard Factory, The Q Club, The Institute. There are lots of small capacity venues springing up around Birmingham holding 200-500 people which people are preferring to go to these days like Suki 10 c which we are working a lot with this year, other new venues are Lab 11, PST, The Honey Club, The Roof Top which is upstairs at The Q Club.

DB: What local names are there?

TR: Well, the biggest DJ in the D&B scene right now is Birmingham’s very own DJ Hazard, he continues to headline events all around Uk & worldwide. Another person is my good friend DJ Alpha, who over the past couple of years has really started to make a name for himself in the D&B scene regularly playing in Germany & Belgium. Another local talent I rate is another good friend of mine DJ Cautious: Birmingham’s very own Jungle Don… his mixing skills are up there with the big name DJs if not better.

I also have to mention K Motionz. He’s still at school I think he’s only 13 or 14 & he’s producing some banging tunes mainly jump up DnB he’s definitely one to watch in the future.

DB: What would you like to add, apart from upcoming shows and dates?

TR: Just wanna thank everyone that has supported me during the past 3 years or so in particular all of my Raiders/93 crew who know had to really party hard. I am a very humble person & will always remember the people who helped me through my DJing career.

Shouts to: Andy Stringa, Tina Jones, Darren Dee, Mc Lenni, Zoe & Jaytee at Konflict Radio, Bazland, Marga Mc, Craig Illusion, and lastly my lovely sisters – all 5 of them – who are always out when I DJ along with their respective partners.