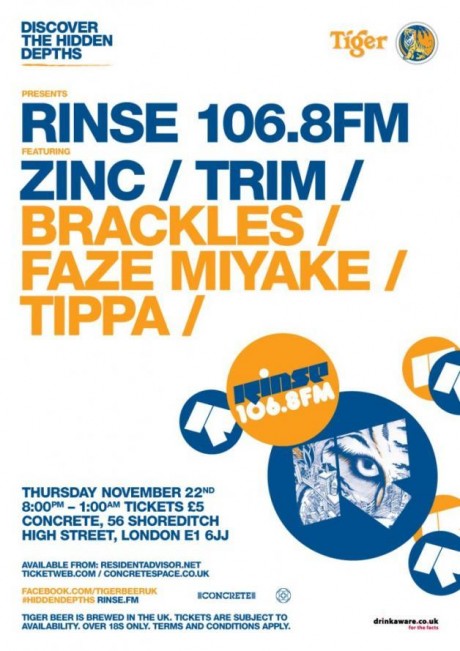 Tiger Beer’s Hidden Depths series returns for one last one before the end of 2012.

Rinse FM has been a haven for underground talent, pioneering artists and groundbreaking music for almost two decades, having started life as a pirate radio station in East London in 1994. Since those very humble days of rooftop transmitters, Rinse has grown into a record label, licensed FM radio station and a leading youth brand that is second to none. Having discovered names like Wiley, Dizzee Rascal, Skream and Benga, Rinse’s roster of talent has continued to create a home for artists with a consistently fresh approach to music.

Rinse in 2012 is a refraction of the current UK scene, with artists like Mosca, Zinc, Katy B and P-Money all representing the sounds of the London underground across the world. For the Hidden Depths of Rinse, we will delve deep into the history of the label whilst showcasing a new generation of pioneering talent.

The show will take place in the heart of Shoreditch, within the intimate surroundings of Concrete’s suitably underground basement, overlooked by the tower blocks of Rinse FM’s early years.