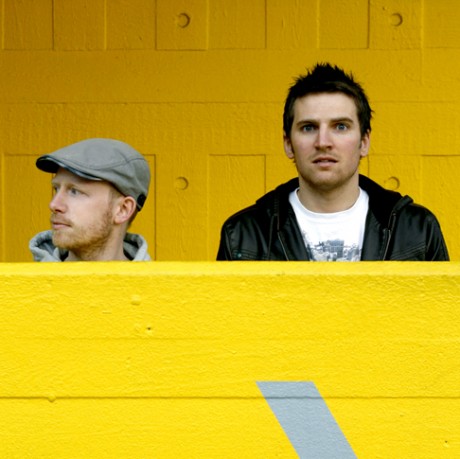 The brilliant Technicolour & Komatic are due to drop soon on Shogun. Sample-driven D&B, sparks off a place in your heart, madness.

Technicolour: I live in south-west London,

Komatic: … and I live in Bedford, which is a town about an hour’s drive north from London.

Damian Bennett: What sort of vibes would like to fill the music with?

T: We try not to get bogged down in the technical side of things too much and just try to create things that evoke a definite mood or feeling.

K: We definitely have similar ideas regarding this. When we’re in the studio we can be toying with samples and chord progressions and something will just click into place and we’ll both look at each other and be like, ‘yes, that’s it.’

DB: What lead you to producing and also to the attention of the label?

T: We’d been making tunes seperately for a few years. We both used to frequent a forum online, where people share studio tips and shoot the breeze. We eventually got talking on AIM, and one day started collaborating on a tune I was struggling with.

K: That tune eventually became ‘Innervision’ which was released on Technique in 2009. After that we started working together more and more, found the results were often far better than the stuff we were making solo.

T: The Shogun hook-up came after making the track ‘Changeling’.

… it was quite different from the stuff we’d been doing previously and we weren’t really sure what to do with it. Shogun seemed like the kind of label it would fit on, so we sent it to Friction.

K: We’d had a bit of an ambivalent relationship with it throughout. But a few weeks later Ed got in touch and said he really liked it and wondered whether we could provide another tune for a potential single. It all went from there.

DB: So what sort of artists inspired you coming up?

T: Well… most of our main influences come from old soul, jazz and funk. But there are certain tunes that Andy and me often draw for when we DJ together and also when we get drunk in the studio.

Obviously Good Looking Records’ early back catalogue is timeless stuff and still inspiring. Early High Contrast… and you have to mention Calibre! On the flipside we always seem to draw for Johnny L’s ‘Piper’ after too many bottles of wine, as it really is the ultimate screwface tune.

DB: For me it’s ‘Uneasy’, ‘Let’s Roll’ or ‘Airwaves’. JL will never ever be rivalled, not in this life or the next. So what sort of places do you like to play?

K: We like to play anywhere where people are into the music as much as us. I’ve done some incredible gigs in Eastern Europe with insane crowds.

DB: Please don’t get me started on Eastern Euro…

T: I recently came back from Holland which was a blast. D&B’s such a worldwide phenomenon these days so you can go anywhere and just have a great party.