Swerve at Plan B: Tendai Words 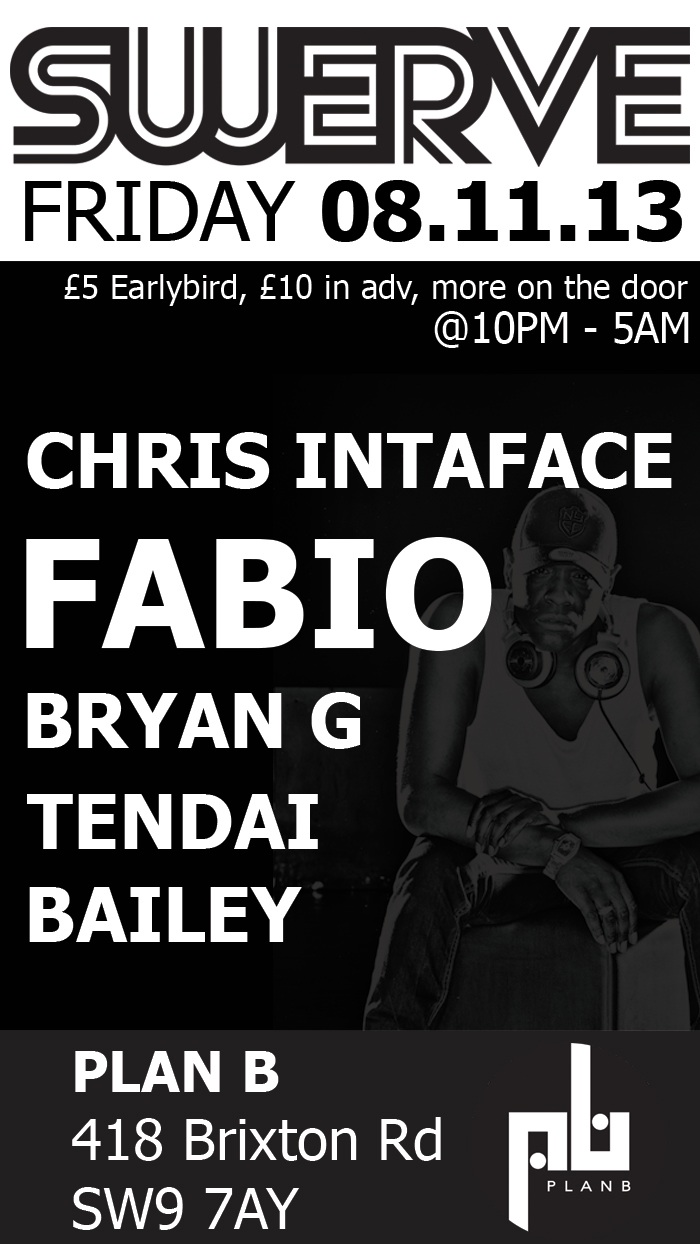 Swerve returns this Friday, the venue is Plan B: check the phenomenal lineup and KNOW that this will be one of the best nights of the year, hands down.

Swerve resident Tendai gives us some words about D&B, about Swerve’s history and also – as is now tradition – some shows he’s catching, always a great read!

DB: What music you into right now sir?
T: Loads of good music out there right now, but the album of the moment has to be Liquid V: Club Sessions Vol 5. Bryan G has impeccable taste – it’s the perfect D&B compilation album, no fillers. If any other labels slept on some of those tunes they must be kicking themselves right now! Also come great releases out now and coming soon from Random Movement & Jaybee, Dave Owen, Pennygiles, Sevin, Eveson – look out for these on labels like Innerground, Good Looking, Inform, Channel 82, & Rubiks

DB: What changes are in the air for D&B? You’re part of Jamais Vu which is a super-frequent night.
T: Club wise things are super healthier although there has been this definite reduction in club nights – there are no longer any midweek D&B nights in London. This hit has affected many different genres not just D&B and is indicative of the fact that people cannot go out as much as they used to. Despite this the weekend D&B are popular as ever. There have been nights recently where there have been three huge nights on the same night and all have been packed out – the masses are and will continue to hit the clubs in force.

D&B will definitely become a part of the popular music lexicon once again: Wilkinson’s recent chart success is proof of this. Labels like Ram, Hospital & Digital Soundboy continue to flex their label management strength and get this music out there in major ways! I’m real happy to be a D&B DJ right now.

DB: What will Plan B be like for the Swerve faithful?
T: Venues come and go, but it doesn’t matter if we’re in the poshest of London clubs or in someone’s backyard – Swerve will always be Swerve, that unmistakable Swerve vibe we bring will always be there. Plan B is the fifth venue to grace Swerve’s presence and its extremely exciting to be in a new place, the venue is the perfect size – it’s intimate, perfect for those up close and personal sessions and the venue has a Funktion One sound system that is FIRING.

Brixton has such an electric atmosphere and I love playing around there – I’m glad that Swerve has found its feet at such a great venue in such a great area.

DB: Got some Swerve stories?
T: There are so many good memories from the past Swerve nights – many of which are probably not repeatable and involve being so tipsy I fell down the stairs of The End – ha ha. The days where The End was turned into a beach party and the Halloween specials were super funny but I don’t have any photos I’m afraid. People still talk to me about the night at Swerve on my birthday at Rudy Lo where I was smoking cigars and decided to play new jack swing in the middle of my set – I also fell down the stairs that night as well. There have been some real memorable tune nights like the first times I heard The Marky & Bungle bootleg of ‘Back Like Dat’ and hearing the ‘Put That Woman First’ Calibre remix – the reaction to both tunes are forever imprinted in my memory and they still both get the same sort of reaction now – needless to say they will be played this Friday.

This was originally a British miniseries of the same name. I completely missed out on it when it was on and this is the US revisioning of the series. Mark Strong reprises his role as the main character but for this version the action has moved from Edinburgh to Detroit. He plays a straight laced cop who kills a corrupt officer he believes killed his girlfriend. His world unravels afterwards as he’s given the case to find the killer and trying to get the case to die despite pressure from the Mayor to solve it and with internal affairs all over him. This is a real smart and gritty thriller that has absolutely no Hollywood sheen. You soon get over Lennie James’ poor US accent, this is great TV.

Boardwalk Empire
http://www.youtube.com/watch?v=ge7MGTo6XVE
Nucky Thompson is back for the 4th season. This show goes from strength to strength, based around the true story of Nucky another related gangland characters such as Al Capone in Atlantic City during the prohibition era. It has great acting, an intelligent script and really high production values making you really feel you are in that era.

Sons of Anarchy
http://www.youtube.com/watch?v=vmNvZAFzxSk
I get hyped up every time I watch Sons. I only started watching it when Breaking Bad ended and I’m on the 6th season already. Who ever though the life of a biker gang would be so rough – from dealing with rival gangs, the police, the STF, drug cartels and the IRA.

American Horror Story: Coven
http://www.youtube.com/watch?v=KqXHGNv83GA
First season was a haunted mansion, the second season was an asylum and now the 3rd season of this horror series is about a witches coven in New Orleans as well as a whole lot of voodoo!!! This show goes from strength to strength and get scarier with each season I absolutely love it.

Mob City
http://www.youtube.com/watch?v=KpTVDoR99o8
I’ve not even seen this yet and I know it gonna be amazing. From The Walking Dead & Shawshank Redemption creator Frank Darabont is this real life story of police chief William Parker and his decade long battle against Mob Boss Mickey Cohen.
Fabio & Grooverider
Tendai mix