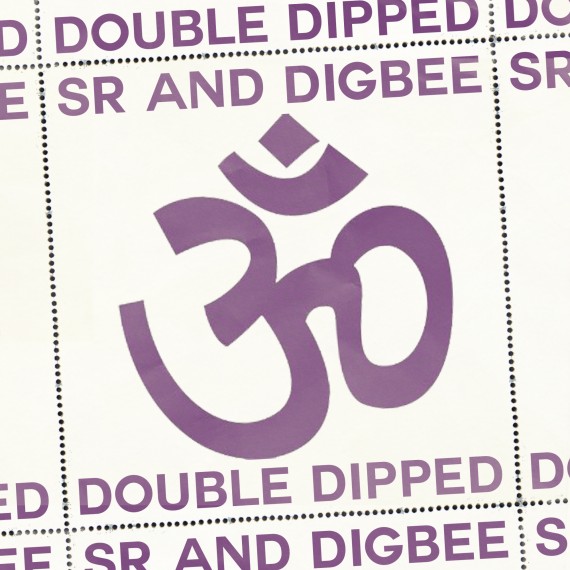 I spoke to SR & Digbee about the Double Dipped ep on 36 Hertz, featuring ‘Contagious’, ‘Body Swerve’, ‘Special Dedication’ and ‘Zoom Zoom’. They gave us an exclusive mix too, at end.

DB: Sounds like you guys have gone in on the early jungle, breakbeat vibe, especially on ‘Contagious’! Do you feel that – in general – slowing the break down from the ‘usual’ 170′ brings in a different vibe and weight?

SR: Yeah, bringing down the BPM really does change the vibe! We went for an old early nineties sound so the tracks had to capture the feel and energy of that era. The good thing is with slowing the breaks down and certainly with the nu skool stuff is that you don’t have to always massively over produce it, the vibe pretty much carries the tune.
Digbee: A slower tempo certainly gives more scope for adding more musical elements. We seem to go through stages of vibing off 140-150 bpm then going back to the 170 bpm. We’re also working on some House/Techno 120 bpm tracks which might be on our album due next year… plug!

DB: And does it connect with the floor, this tempo and feel?

SR: There’s tons of music out there at 140-150 BPM and it always connects on the dancefloor if the tunes are good! But it’s the feeling that you get from this era really works well, from the uplifting piano tracks to the breakbeat junglism side of it.

There’s so many different styles of old skool and we’ve tried to cover as much of it as possible. I do feel we need to make more ’93 darkness tracks like what Rufige Kru, FBD and those kind of artists used to make. That’s one of my all time fav eras in drum and bass and it’s still gets a crowd going, just look at reaction it gets at the Stepback Sessions!

DB: Who is the vocal on this tune? Love it.

SR: It’s ‘Movin On’ by Carolyn Harding. I knew I wanted a vocal on the track and it was in a massive bank of accapellas we’ve got! Of all the vocals, this one just sat perfect with the key and vibe of the tune, although it was completely out of time! Once it was cut and timed up it sounded even better than I expected.

DB: Are you trying to recapture the ’90s vibe, especially in an age where D&B can be very commercial? ‘Body Swerve’ uses many of the sounds of the era, in a great way… when rave and jungle were really all one big beast.

Digbee: Exactly with ‘Body Swerve’ we wanted to create that the ’90s free rave feel.
SR: Trying to recapture the vibe of 90s dance music is what this is all about. D&B from 91 to 96 is an amazing era and we’re really feeling that in our production.

I love all styles of D&B and yeah it’s true, there’s a very commercial side to D&B at the moment but a lot of it sounds wicked. I know a lot of people are divided about D&B being commercial but you can’t knock an artist if their tune does well: they’re just trying to bring home the bacon like the next person and it’s still D&B! I don’t really get to hear that much of it though if I’m honest, but I do like the tunes. I always follow the more underground breakbeat side of D&B.

For me personally, I’m all about chopping breaks, edits, filters, timestretching and so that’s one of the reasons for wanting to do the nu skool stuff. You can really go back to the old way of beat production with it.

DB: Where’s the hotspots that are receptive to your sound, where you guys hitting… and what other tunes from producers are blending in with the set?

SR: We played at Skittle Alley weekender in the summer, that really went off! Vapour’s been pushing this sound at STSD’s Stepback Sessions which always gets a good response.

We’ve been discussing putting on 36Hertz nights but we’re all working on albums at the moment so that won’t be till next year.

There are some amazing producers in this scene already with Jem One being one of my personal favourites plus a well known D&B producer has been going under the name of Suspect Chin: his tunes are just on another level.

DB: And what’s one or two picks from the past you’d include in your set?

SR: I’ve always loved DJ Trace ‘Lost Entity’ and Splash ‘Babylon’… or anything on Reinforced! Goldie is the don and that label has got to be the best of all time.

Digbee: ‘Together’ (VIP mix) by Omni Trio, what a tune and Mind Games ‘Desired State’, another classic.