DB: Is your music a collab as such, in that you all contribute to the collective sound?

R: Yeah there’s three of us: Vega, Cooper & Pessimist… a Glaswegian, Midlander & Bristolian. But we’re all now based in Bristol, all living within a mile of each other which helps with getting together regularly. We’ve all known each other for long time, we know what each other like musically, so it’s not like some awkward collaboration where we have to compromise on something for the sake of getting it done.

R: We formed Ruffhouse at the start of the year as a vision to start a production outfit. We were already DJing together a lot at events so the transition was inevitable. It’s been a really natural progression since then and has been very easy for us to work together in the studio.
DB: What influences you? Music, films… anything.

R: Well as there are three of us, so we all draw influence from different things. If we are talking about films specifically then we are into movies like Valhalla Rising which has a crazy soundtrack, the whole film is like one huge crescendo. Films such as Eraserhead, and Antichrist, where the soundtrack is designed to make the film seem more intense and add suspense through sound design. Also films like Scarface and The Warriors which have some wicked synth work which is more Vega’s kind of thing. He loves violence, drugs & 80’s synths.

We’re fortunate enough to be surrounded by a large group of friends who all share a similar love for music. Even just having a rant or a chat to someone about music is enough to make us want to get in the studio and write beats. There’s always a soundclash going on between us on YouTube after a heavy nights session.

R: We’re massive drum and bass heads and because of our ages we came into the scene at different stages. We have been able to see the scene develop into what it is today. Whether it be 1998 or 2012 a good tune is a good tune and there’s been plenty of them up until now. Although back then it was definitely less restricted & people wrote what they wanted.

DB: What gigs are forthcoming?

R: Next gig will be Friday 30th November at Abstractions, Bristol. You’ll probably see a lot of us down there seeing as its actually run by Vega. Plus we have a few more lined up between now and the end of the year. Keep your eyes on the FB page for deets, www.facebook.com/ruffhouse001

DB: In general how do you think about D&B or ‘bass’ music… are genres meaningless, or, conversely, are they good as keep loyalties fierce?

R: When it comes to classification and genres certain styles of music need to be differentiated by names, whether it be House, Dubstep, D&B whatever. But within those genres we feel there is no need for classification.

When it comes to current music we feel there’s some real forward-thinking artists about. You definitely need the fans who are loyal to the sound they like, and this way of thinking definitely helps keep scenes healthy. At the end of the day people are into what they’re into, so they will support what they feel. So let them decide how to differentiate. 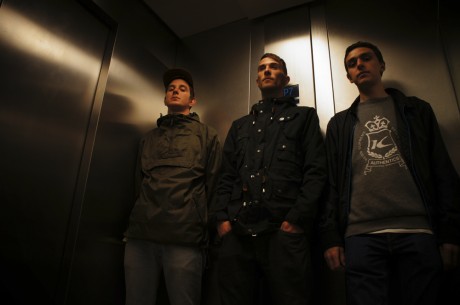 DB: How do you see D&B progressing throughout the rest of 2012 and beyond?

R: D&B as a whole is not as healthy as it has been in our opinion, and it’s pretty infrequent that you go to a sell out night. However there’s definitely some very good events putting on good lineups to still go to that do have a really wicked vibe, and there’s also some great music being made. People such as Loxy & Resound, Fracture, Jubei (also Code 3), dBridge, Skeptical, Clarity, Overlook and Amoss to name a few. The latter 3 are all killing us with their tracks at the moment. We are also being sent a lot of tracks too from new unheard producers. As people keep pushing boundaries it can only mean good things, it’s important not to get too nostalgic.

Saying this we think the whole cliche of ‘you shouldn’t make drum & bass that’s influenced by drum & bass’ is a disrespect to the music we make and a very arrogant thing to say as a D&B-influenced approach has produced some of the most forward-thinking music around. It’s been going for over 20 years now.

DB: And what release info you got for us?

After that we have another 12″ on Ingredients a couple months after.

Recently we also did a VIP of ‘Inversion’ by Loxy & Resound from their Burning Shadows LP on Exit which we are really proud to have been asked to do. However we doubt this will ever be released.