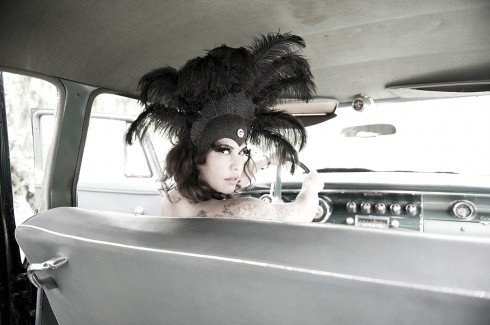 Robyn Chaos has not just carved big bold D&B-shaped trenches across Europe, the USA and, well, the other remaining bits of the planet too in her hyperactive capacity as DJ and promoter (reppng Therapy Sessions, Freak, Dylan, Limewax and more as you will read), she has then taken a blowtorch and cheerfully set fire to the template so no-one else can do it.

She then did us a mix – all after the drop…

Robyn Chaos: Wow, what is new…

A lot of traveling lately and for the next few months. I’m just back from touring Europe with Therapy Sessions in Bucharest, Seville, Voronezh, Lisbon, Porto, as well as dates in Berlin and Linz. Then shot over with The Panacea to Therapy-it-out as well in Christchurch, Perth, Sydney and Melbourne. In between I safari’d in Africa, thwarting lions, hyenas and drop toilets. I worked on new tracks with The Panacea. It has been a very full last few months. Right now, I have a little break before the Therapy Vienna ‘XXXmas’ event on December 18th.

We just expanded Therapy Sessions to include Ecuador down in South America, and look forward to checking out there, along with our already running Mexico City crew, and soon to start up Buenos Aires and Bogota in the next few months.

DB: So not much to report then…

RC: …on the Anger side [Robyn’s agency], its been a busy, productive, exciting year, with a lot of my artists releasing or in the process of releasing albums; The Panacea in July, Audio’s Virus debut out about now, Limewax’s second LP coming in next few months, Dylan and Kitech album currently in production, The Sect and their eighteen track extravaganza as well lined up.

DB: You run the agency, you DJ and on top you make it look glamorous. Do you think D&B needs a bit more pizazz?

RC: Glamorous, eh? I like to call it “Armed Candy” ha ha. Well, let’s just say I like a bit of pomp and dandy-ism in my life and I’ll dress up to go get chicken at the supermarket. But you know, it’s not all about the imagery. You need to reconcile with image and content, and your image and content have to correlate. Music should first and foremost do the talking, BUT! It should be fun, right? It should be part of an artistic process, right? Hey though you know, it’s definitely getting better. And at the end of the day not everyone is cut out for guyliner. I think Chase and Status in guyliner would scare the shit out of me.

DB: We are at a stage now to look back at the 00s, what a decade. For D&B it has been non-stop. And you lot are typical of this. What’s some highlights Robyn?

RC: Oh my god, yes actually you are totally right, what a crazy decade we had! From like 2003 to last year I guess it was just madness as regular ha ha.

… Therapy Tel Aviv and then swimming at midnight under a red moon in the dead sea naked. Ooooh maaan. Though you want to not have any cuts or scratches on your body.

… Almost any trip in Russia, outside Moscow is an adventure in itself ha ha.Having to take a plane which you had to board from under it like WW2 style was a bit worrying. Voronezh was awesome this October.

St Petersburg Therapy Session: people base jumping from above us in an abandoned Electric Tower with 15,000 insane fans and our names in frickin laser beams. Me swigging JD out of the bottle swinging from a safety-free girder or something from the top, to the horror of the Russians looking after me.

… Portugal, Portugal, Portugal. I was going to say Halloween 2008 but this halloween totally blew that Halloween out of the water; two nights of mayhem. One night on a boat where the crowd, by accident, almost pulled the decks into the dancefloor. The next night in Lisbon where we had stage divers and people’s shirts getting ripped off in crowds of 3000.

At least this year, I didn’t end up a bit worse for wear at 7am in Lisbon airport in a Halloween costume..

.. our Black Swan events in Bristol. When Dylan and Ed Fiasco blew fire (using 200 proof Ukrainian vodka) from behind Counterstrike’s head on stage. All our idea. It caught me on fire in the front row protecting the punters. I had to beat the fire out of my booby area with some unnamed guy’s pants on the dancefloor. Drug-fuelled mania. People climbing over walls to get in. Yardie dramas.

… Therapy Bucharest with Audio and Panacea, the event held in the main ‘Hyde Park’ of Bucharest (very much illegally) with Mao-style Therapy banners hanging from the ceiling in this amphitheatre. It was like walking into a circus. Beautifully-executed!

… Therapy Vienna last December. We got drunk, we got locked into the venue. We eventually got out and tried to find taxis.I had lightning painted on my face which I had totally forgotten about. And no-one reminded me, even when we were having breakfast.

… Therapy Japan with Dylan. Three days, off the scale.

… Therapy Aarau where they decorated venue with chainsaws and severed heads with lights in the eyes. It was very, very creepy. Like an evil Herbie Hancock video.

You know it’s too hard to pick one.

DB: Is it true you lot were greeted by screaming and fainting fans when you would play in certain places?

RC: Ha ha! yes it’s crazy. I have had it in airports, very random and, erm, surprising. I actually got spotted in my free outdoor yoga class last week, how nuts is that? A girl comes up and says “Are you by any chance Robyn-Chaos-Faith-In-Chaos-Robyn-Chaos?

I remember in Estonia years ago, with Gigantor (the scene of the infamous sauna towel saga, let’s not go there). We were doing interviews and people were just going insane. I have signed people’s bodies. I got mobbed so much in St Petes once that I had to be pulled out Bodyguard-style by some Russian looking after me. Like full-on pick-me-up-and-carry-me-out-of-madness stylie. Ha ha! It was actually almost scary. Kinda lame for a moment too, I could hear the music.

DB: So to attain this level of crazyness… what’s the Therapy mindset? Is it just simply ‘harder D&B’?

RC: I’d like to think it’s not hardness for hardness’s sake alone. In fact we hate that. We can get many demos that are simply madness with no real musicality to it, just like ‘If I make noise, that’s all it has to be’. We’re more for anything experimental or genuine really. It’s not to make a point, it’s not to simply sell units, it’s to progress music and a style of music. To do that you need to take risks and chances, be creative and be fearless. We promote that. You may not get it right all the time, but to always be trying to get it right on a fiscal level is the death of art. And to only keep doing what you think you have been successful at, to never change, because of fear to change, to soak something forever, that’s the antithesis of an artistic mindset.

DB: People may know some of your crew such as Dylan and Limewax plus of course those names we’ve discussed above. Can you give us a updater/roundup in general?

I’m just really into everyone’s work right now to be honest! It’s making me want to challenge myself. A bit of healthy, creative competition.

DB: So what’s happening in the US regarding D&B?

RC: The USA is a strange place. Frankly dubstep (well, what underground scene there is) is reigning at the moment. But generally it’s just NOT an underground music country. There are few underground outlets, but much much less than the UK and Europe.The laws with promoting, clubs, alcohol, licenses, makes it near impossible. And then once you do figure and start an event, you are almost automatically looked at as drug-peddling or up to something illegal and mischievous. It’s a damn shame. You could never have the free market, simply the freedoms to do what we do in Europe, Japan, Oz, NZ etc in the USA.

We still do Therapy Philadelphia sometimes and places like LA and Washington DC still rock. But it’s a very, very different scene.

DB: Got a dream, all-time lineup for Therapy?

RC: Well there’s this burlesque troupe called ‘Gravity’. I’ve been wanting to get them on a tour for ages.

On drums: I like the Foals drummer right now, and some spare electronic Fever Ray styles.

On guitar: Prince (in fact he can be on everything. I’m having a Prince moment lately)