Q: I bought decks when I was 15 and so I’ve been mixing since then. I’ve played at all over the place with Club Colosseum, Labrynth, Proud 2, Eden, Kayna, Es Paradis being the biggest clubs I’ve been booked for. I’ve had prime time slots on Abyss FM, Freeze FM, Vybe FM under my old DJ name “Quest”.

I’ve been producing on and off for about 10 years, this year will see my first record label release so I’m pulling my finger out and getting back into making music so you’ll see more from me this year.

DB: Where did these new tunes come from?

A demo version of ‘Red Dwarf’ was made in 2011 so when I was told it was getting released I just finished it off.

DB: So with your background, what did you want to bring to D&B?

Q: I have a bit of a split personality when it comes to D&B. I go through phases: from producing a couple of liquid tracks, then I’d make a Techy track or a deep minimal one.

DB: And also re your background you go back to pirate days. For people new to the game can you describe the importance of pirate, how it worked, what sort of sounds you’d hear…

Q: It was pirate radio that gave me my first real exposure to this music, I would listen to Don FM, Eruption, Kool, Dream etc religiously as it was the only way I could hear this music apart from rave tape packs.

Pirate radio back in the early 90s was essential for the growth of the music as you couldn’t hear it on legal radio. Once the major stations cottoned on to the popularity of the music through the pirates Radio 1 and Kiss started their Jungle shows in 1994 from then on the scene grew bigger and bigger to what it is now. I loved the radio scene of the early 90s as back then DJs would be mixing hardcore and jungle tunes in the same set. I’ve seen a lot of DJs go from DJing on these pirates to becoming major players in the scene now. 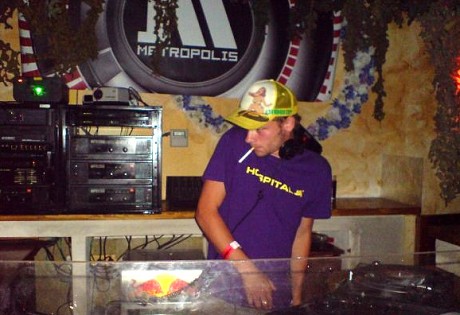 Q: I’m really proud of the scene as it’s the healthiest it’s ever been. D&B has this knack of getting to number 1 in the charts yet still keeping its underground feel.

Q: I’m still buying and making it as it keeps outdoing itself, with all the new producers out there raising the bar, standards keep improving and the D&B listener seems to be growing up and becoming less narrow-minded so producers can get away with experimenting more that they could do 10 years ago.

DB: What’s a great ‘live’ story you have?

Q: DJing in a museum in Tottenham for the launch of Brian Belle-Fortune’s All Crew Must Big Up book was cool, I remember walking up the path to an old Museum and hearing D&B being played was strange. Myself and longtime DJ partner DJ V played the last set, they switched off the lights and me Viv cranked up the system playing tracks like ‘Whiplash’ by Lemon D, and Die’s take on ‘Watching Windows’.