Prepare yourself for the Urban Nerds NYE party… 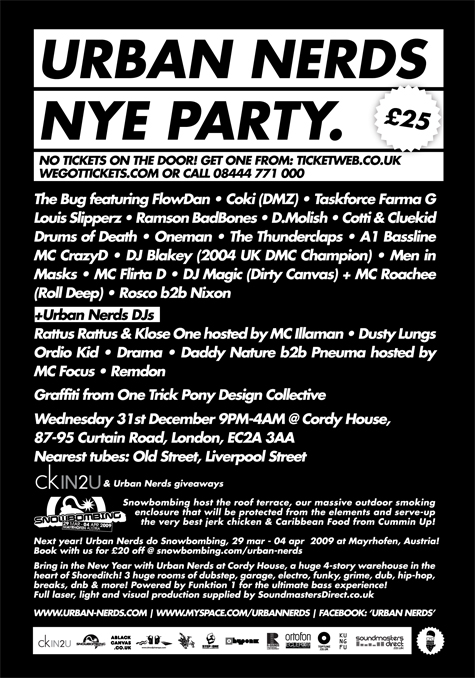 Urban Nerds hit me with an email tonight detailing their MASSIVE NYE party taking place at Cordy House in Shoreditch on, you guessed it, 31st December. If you’re stuck for something to do and love your dubstep, DnB, grime garage, and everything else in between, then I strongly suggest you get down there (with ticket in hand) and wig out HARD. The line up is pretty RIDICULOUS – one of the parties of the night, if not the year..

…What else do you expect from a lineup including Drums of Death, The Bug feat. FlowDan, Coki, Task Force and the roster of Urban Nerds djs….

This is what the guys had to say…

Since March 2007, Urban Nerdshave championed London’s finest underground musical talent with their residency at Brick Lane bass-bin, 93 Feet East. The past year has seen the east London party brand tear-up the decks in Fabric’s cavernous third room, host the after party with *ckIN2U* for the DMC World DJ Championships and team-up to with the likes of Time Out and Don’t Panic.

A fantastic year of parties culminates in the ultimate New Year’s Eve celebration! Taking place in the heart of east London’s trendy Shoreditch, the Nerds are taking over Cordy House. Fast becoming the coolest nightspot in the Big Smoke, it boasts 4 floors of unadulterated, raw warehouse space and a labyrinth of rooms capable of holding 2,000 party people! Sound will be powered by Funktion 1 systems for the complete, bass-heavy experience! Ravers can also enjoy the massive roof terrace, hosted by Snowbombing Festival it will serve-up the best jerk chicken & Caribbean food and provide a covered smoking area!

Providing the beats and bars are some of underground London’s biggest acts!

This is going to be the only place to be come this New Year’s Eve – a seriously heavyweight party showcasing the very best in London’s nightlife – DO NOT MISS OUT!

Tickets are almost sold out and there are NONE on the door!