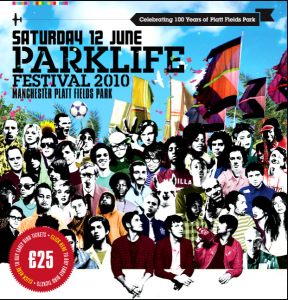 It’s not often one day festivals have a line up equal to that of a 4 dayer, but at Parklife festival in Manchester it seems we’ve found just that! In association with the unstoppable Warehouse project and various other promoters/nights in Manchester there is no less than 40 acts across 6 stages. Headlining the main stage are Friendly Fires, Calvin Harris, Four Tet, Kissy Sell Out and Erol Alkan, but the real gems lie in the Lost in Bass Arena 1! To name a few: Magnetic Man (live), Buraka Som Sistema (live), Joker, DJ Zinc, Toddla T, SBTRKT the list goes on! Other stages include DJ talent from the likes of Jamie Jones, Simian Mobile Disco, Fake Blood, Boy 8 Bit, Roni Size I could literally go on and on! Not only is the line up insane but it’s £29.50, nuff said! Check out the website for all the finer details.