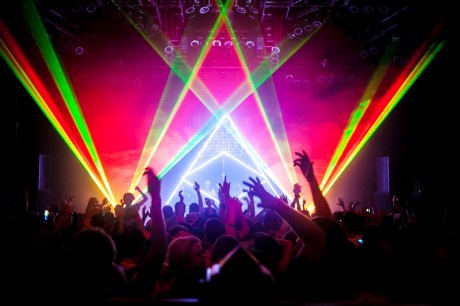 DB: The image you have, the titles: it’s a dark, grimy world you inhabit…

MC: We think dark imagery looks cool and goes with the type of music we prefer which is equally as dark, heavy and yes grimy. That being said, one of our next songs is called ‘Tits in My Face’ and we did it with Chicago Juke and Booty House legend, DJ Funk and Fast Eddie. So that one is fun and not so dark.

DB: I feel like you guys could just produce and produce, then when you play it live you get inspired even more, watching the crowd react to different things. Is that all valid to say?

MC: Definitely, we love seeing what works and what doesn’t to different audiences and at different points during a set, it helps us to figure out what works in a live setting more than what works when you’re sitting at your computer or listening at home or in your car. We love writing for both sides of the spectrum, but for the most part, it’s more about what plays out live on a huge sound system for a ton of people.

It’s all being written as we go.

DB: I heard about this live thing you bring…

MC: We perform inside a 16-foot laser pyramid we call ‘Eye Live’. It’s something we designed and built with the help of a lot of our friends. A video probably does more justice than words…

It’s a DIY project which is constantly being tweaked and changed as we go along. We’re designing a new shape for the stage setup which will utilize more neon lights with more intense lasers. 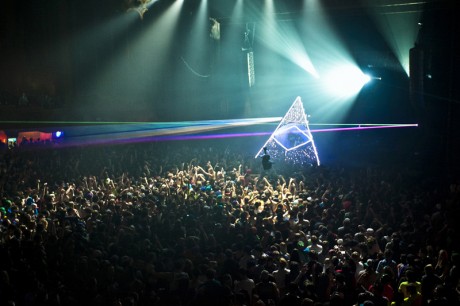 DB: Name some various artists that you love.

MC: Nine Inch Nails, Depeche Mode, Prince, Telefon Tel Aviv, Trentemøller. Plus lately Graham has been getting into a lot of the darker D&B like Phace/Misanthrop (aka NEOSIGNAL) and Black Sun Empire, it combines the sound design that we love with dark, brutal bass sounds, definitely some inspiring stuff.

DB: Production question: if you use technology, is it this crazy thing that it never stops changing? I mean if you have a synth or a bass sound that you like, is the temptation there to see if there’s a recently updated or NEW sound to use instead?

MC: The problem lies within trying to keep up with every new trend/plug-in/effect of the moment, because there are far too many and it becomes impossible to get good at so many things. Using the newest piece of gear can get you some great new results, but so can just learning the gear you already have to the best of your ability. Prince wrote his best material on one drum machine (the Linn LM-1) and a few synths and FX units and they are some of the best records of all time. It’s more about knowing how to use what you have really well more than knowing how to use everything fairly well. 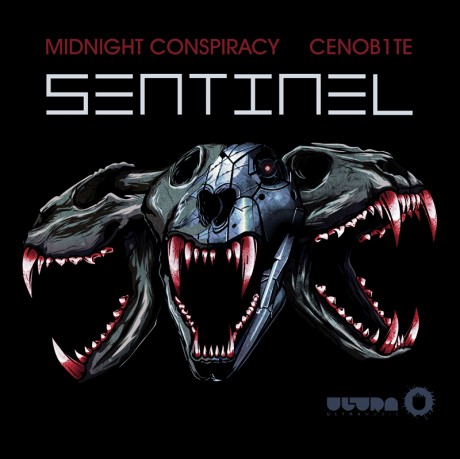 DB: OK. So talking about your choice of weaponry, what sounds are your favourites when producing?

MC: We love dark, distorted, abrasive synths with lots of filtering and movement, but we also love clean, crisp, well-recorded instruments, thus the blend of orchestral and electronic on our songs. We’ve been using a lot of FM8 for synth tones lately, it’s very rewarding to create sounds from the most simple sine waves that become something so much more complex. As far as getting ideas down quickly, it never hurts to have some good, basic drum samples loaded up to make beat-making that much easier, and it doesn’t get too much better than a nice piano sound for melodic ideas.