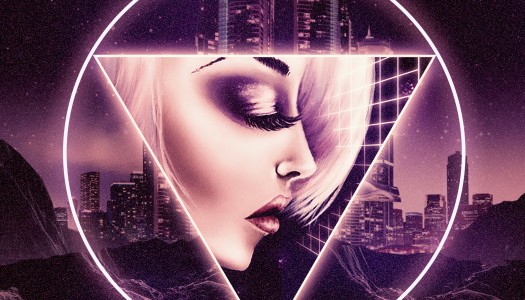 KAOS spoke about his new ep on Circus.

Hi, the cover art is distinctive: where did it come from?

K: When it came to the cover art, I was really inspired by the retro futuristic style and wanted something done in that sort of vibe. We found a really brilliant young artist Anastasiia, fresh out of school, who paints really kick-ass faces on canvas. She painted the face and then a graphic designer put it all together and created the awesome cityscape.

What inspired ‘Bitchcraft’? A title like that makes me think of Miles Davis… that’s a compliment.

K: I wanted to do a track around 120 bpm, but I didn’t want to make a house track or a 4×4 track. So, I wanted to play around with that tempo but not make house. My goal was to make something that appealed more to my sound so I started adding some hip-hop elements and a kick drum, that sounds like an old-school hip-hop kick drum, then threw some chopped up some vocal cuts into the mix and voilà, you’ve got ‘Bitchcraft’.

I drew influences for ‘Bitchcraft’ from old-school hip-hop elements, old-school garage as well as house music from the likes of Dirtybird records. The vocal cuts are very old school garage sounding in my opinion.

Now to ‘Follow Me’, can imagine this is pretty evil live?

K: Yeah, it sounds awesome live! The crowd really loves it, gets them going and I love playing it out.

The ep comes from all directions. Was that the intention with the ep?

K: No, it wasn’t really the intention, it’s just how I write music.

I grew up in a family with a wide variety of music tastes, I was constantly exposed to music such as my father’s 60s Bollywood to my sister’s boy band obsession.

As a teenager I was in a band and was a huge fan of nu-metal bands like Linkin Park and Slipknot. I also loved and still love old-school funk and disco. When I write music I draw influences from all of these different genres, creating something, which ‘comes from all directions’ as you say. I call it a ‘controlled chaos’, hence my name!

Are you a big fan of vocal house?

K: Yeah, I love vocal house. I’m big on vocals in electronic music in general. I dig producers like Duke Dumont and Bondax.

Examples of some vocal-led tunes I like would be: Aaron Smith ‘Dancin’ (KRONO Remix) and Aaliyah ‘If Your Girl Only Knew’ (Finnebassen Remix).

Are there any parting words you’d say about the EP?

K: I’ve been waiting to share the EP with everyone for ages and I’m super excited that it’s finally out. I still can’t believe it’s on Circus records, I’m thrilled about it and have had a great response so far from the fans as well as from producers that I have always looked up to, the ones who inspired to make me music in the first place. It really is a great feeling.

K: I’d like to give a shout out to Imanos for playing my track on Diplo and Friends on BBC Radio 1, the guys at Trapdoor for signing my first record and All Trap Music for their support from the beginning.