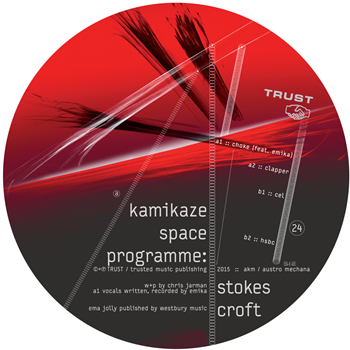 I spoke to Kamikaze Space Programme about the new Stoke’s Croft ep on TRUST.

DB: What inspired the ‘Stokes Croft’ title? I know the area well although this is going 15 years back mind. Nicely seedy in a way, some good spots there. The first place I saw Banksy work too, when he was some local guy.

KSP: My studio is based in Stokes Croft, probably in the same building you saw the infamous Banksy artwork.

It’s still very much an insane asylum for artists, hippies and degenerates, whenever I went for a smoke break outside I would land in the middle of bedlam before heading back inside to the serenity of a quiet studio room.

I would say I’m more of a spectator of the area than one of its residents, I’m sure this yin and yang has had a major effect on the music of this EP>

DB: Bristol agrees with you then?

KSP: Bristol has such a melting pot of artists with so much cross pollination is really easy to bounce off people from many musical backgrounds. I think that’s why this city always produces artists that have a sound that’s difficult to pin down.

DB: Now you have past in D&B as Raiden, so what enticed you to these beats?

KSP: Thanks! Anyone that’s familiar with my past works as Raiden will know that I’ve always had a techno edge to my music and a tendency for the experimental. I began to feel stifled by D&B and a new chapter was looming.

It was clear I needed to spread my wings and start something new as my musical tastes and the evolution of D&B were going in different directions. In the 90s I was producing Electro and Techno and fell into D&B somewhat by accident.

As I’m now older it became now or never.

DB: Emika’s on here I note, how was it to work with this enigmatic person?

KSP: Amazing! I received an email out of the blue from Emika asking if I would like to remix a track from her forthcoming DREI LP. I sent her some material I was currently working on and she instantly fell in love with one of the tracks and wanted to sing on it.

It was due for mastering in a week for the TRUST ep so we had to work quick! It was great as it was such an organic process, and we bounced many ideas between ourselves.

It was not something I expected to ever happen which made all the more satisfying. Emika is such a talent, when working with her I become really emotional attached to the ideas and the melodies she brings.

DB: What are some favourites of yours in the electronic sphere over time? I’m reminded of Disjecta and all sorts of lovely things. I do love that overall overdriven 808/909 whatever it is you use.

KSP: A lot of that white noise you’re hearing is static signals that already exist with the sounds and I pull them out or Electromagnetic radiation.

My biggest influence has always been Future Sound Of London, to me their music is perfection, deep trippy, unpredictable: a perfect marriage between synthetic and organic, they perfectly capture life of a city.

Emptyset has been a major influence over the last few years, after seeing them live even more so, I love the idea of music without the structure where the chaos is untamed, and they know their signal processes inside out.

I adore early Human League with their dystopian sound, as well as the fact they are also influenced by the brutalist architecture of postwar UK that I grew up around as a kid.

I’ve found myself getting heavily into musique concrète in the last years; it’s mind blowing what people such as Pierre Henry, FC Judd did with so little.

DB: So all of this established: tell me when the Kamikaze Space Programme concept came to you and where you’d like to take it?

KSP: I started KSP in 2011. It took me a few years to find my sound as KSP. If you’re serious about a type of music it takes time to get good at it and have your own identity.

After some time I discovered foley recording and began to learn the endless unique possibilities of this method and as I got better at it the music began to improve.

As far as I’m concerned the software and hardware is merely there to facilitate your ideas, I don’t like gear that dictates what it wants from you.

As for the future I want to continue pushing recording and production methods that take everyday sounds out of context and into the format of electronic music.

DB: Tell us more about how you record…

KSP: My main method is recording found sounds, contact microphones that record resonant spaces inside objects and EMR microphones which capture electromagnetic signals which are all around us.

This all gets processed inside the computer and turned into music.

The thing I love about this method is you have to go to great lengths to find interesting sounds so you are constantly challenging yourself but the results are worth it. The environments I use are as much a part of the music, if not more than the gear itself.

DB: Random question: you can go and sit in any studio recording session in history, any genre: which one and why? Anything from Parliament to Eno, to krautrock to Aphex to whatever. Prince or heavy metal even. Which one, what would you see and like to check out?

KSP: Good question! I would have to say the recording of ‘Bohemian Rhapsody’ by Queen: they pushed the studio and recording techniques was beyond what was possible at the time.

Some of the vocals were overdubbed up to 60 times and involved many studios. The only person that knew what the outcome would sound like was Freddie Mercury himself, I couldn’t imagine having such a large idea trapped in your head and for it to be realised, then for it to become a bonafide classic.

DB: Any shouts and things forthcoming?

KSP: I’ve been very busy as of late. My EP on TRUST will be coming on 20th April.

Following that I have an EP on Mindcut entitled Chrome Won’t Get You Home. I’m currently working on my next release for Mote Evolver due in the Autumn.

I also have another project with my mate Wedge called Dot Product which pushing the foley thing to its very limit, and have just started our debut LP for Osiris.

Shouts to Wedge my cohort in Dot Product for all the inspiration, Georg at Trust, Emika, Lucy from Trix PR, Axel Sohns at Mindcut, Luke Slater and Heidi at Mote Evolver, Nico and Silvo from KilleKill, Bob at WNCL, Paul Mac, Tasha from Neighbourhood, and all my fellow teachers at Bath College for all your valued support!