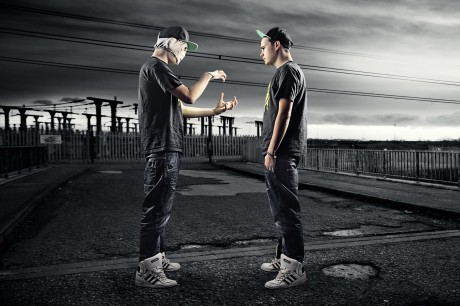 Funtcase is part of a massive Circus night in Brixton on October 5, we caught up to talk about funt and bass.

DB: Hey first off this big Circus do sounds good, can you give us the lowdown on what’s on?

FC: RAWR! it looks epic and WILL be epic! It’s the top level talent of a label thats been the forefront of the dubstep genre for a while now, all rolled in to one night, what more can you ask for?

FC: 2012 has been so good to me, I’ve played some of the gigs of my life and finally seen the release of my ‘Doomed EP’, (above). Personal highlight has to be when I played to a ridiculous amount of people in Las Vegas for Electric Daisy Carnival: I stepped up to the DJ booth and looked across at the massive mound of Americans starting to cheer as they saw my mask. Breathtaking.

All in all there’s talent everywhere in the scene at the moment and pretty much all of the right talents are rearing their ugly heads and getting their feet in the door. There’s much throwaway stuff flying around but I think dubstep has been very fortunate to be so explosive in its demand and also the various links with other genres which seems to keep the vibes 100%!

DB: Production-wise what sort of diversions and changes have you personally felt creeping into your own stuff?

FC: I’m a big big fan of experimentation these days! A lot of my tracks sound almost ridiculous now, as I’m trying to make so many different sounds within the styles of the hard dubstep I make. If you listen to ‘Dem Mans’ off the new ep, what has EVER sounded like that in dubstep? It’s insane, it’s almost confusing in its own way but for some reason it works, and I love it because people are latching onto the experimental ideas with open arms!

DB: In general how do you pick up on stuff that is around?

FC: Traveling and word of mouth from other DJs are where I find a lot of the new styles, for instance when I played Starscape in Baltimore this year, Dillon Francis told me about Trap. I had no idea what he was on about but I was intrigued, then in his set, he played Flosstradamus’s remix of ‘Original Don’ and it blew my head off. It had an energy that my mind almost couldn’t process! It’s so minimal but so hard at the same time and it gave me goosebumps the way the crowd reacted to it!

It’s the same with Moombahton really. I was introduced to it by a promoter in Portland, Oregon and it opened my eyes. A bootyshaking kind of style but you can incorporate any style of sound you want in it as long as it has the groove.

DB: By the sound of it you’re touring a lot…

FC: I’ve been touring the UK, the USA, Australia, New Zealand and been to some places I never thought I’d be sent to play dubstep, but for me I think the top live bookings have come from Belgium. I don’t know what it is about the Belgians, they love dubstep so much, and they go mental every gig! They have countless festivals on throughout the year too, and all have been great. I love them crazy fools.

DB: Speaking of going mental, what danger lurks in the box?

FC: Either my remix of ‘Squid Attack’, by Genetix… or Crissy Criss’s remix of my track ’50 Caliber’ (at end). Those tunes get a serious serious reaction live.

DB: Lastly, my album session question I persistently ask: which album session over time would you have loved to have attended, and why?

FC: Wow! I think it would have to be Micheal Jackson’s ‘Bad’. Most of the tracks on there are timeless and he’s a vocal genius. I think I would’ve been in utter awe watching this album being made and recorded. Defining music point right there, the guy is a legend.