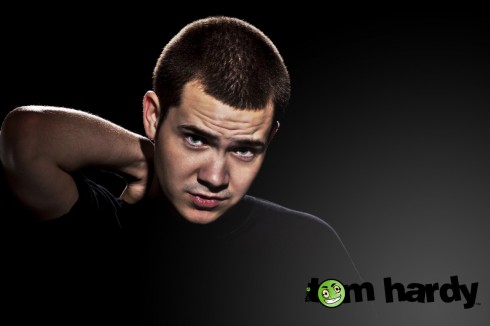 In this time around in our Fry Ups I introduce Rapper Thee Tom Hardy. Born Thomas Hardison on April 8, 1989 in Durham, NC who is signed to 9th Wonder’s label It’s A Wonderful World Music Group. Fry Up after the jump.

First of all who are you and what do you do?

Can you talk us through before meeting 9th Wonder what where you doing?

Before I met 9th I was making music and trying to make a name for myself, locally and through outlets like Myspace.

Who had the idea of bringing out ‘The Curse of Thee Green Faceded’ and it being presented by Don Cannon and your mentor 9th Wonder?

The Green Face is my logo and it’s a twist on the yellow smiley face that you see all the time. Our plan was to make a series of three mixtapes called “The Hardy Boy Mystery Mixtape” series. Each installment would have its own name. 9th Wonder actually came up with the title “Curse of thee Green Faceded.” Don Cannon had heard my music and he dug what me & 9th were doing, so we got him to put his stamp of approval on there.

What did you want people to get out of your first project being presented by two infamous Producers?

The music that me and 9th made, as well as the music that I made with my other producers like Thee Band Geeks & E Jones, was hot already, but having both of them cosign me for that mixtape helped more people pay attention to it.

You with the Hardy brothers ? Did you used to watch WWE?

Do you necessarily think that quality of sound has a big impact on Hip Hop fans and fans a like?

Sound quality obviously has an effect on the way that people perceive the music that you make. As an artist you want your music to sound as good as it possibly can.

What’s with the Thee and not The Tom Hardy?

It’s “Thee” Tom Hardy because the extra “e” at the end could stand for any number of things… Excellent, eloquent, enthusiastic, eccentric, exemplary… The list goes on.

Out of all the e’s what are you most? E.g. are you more Enthusiastic than Enchanting?

I would say I’m definitely an enthusiastic MC, very dedicated to my music. Some would say that I’m enigmatic. I’m a little weird, eccentric. But most of all, extraordinary. But I guess you’d have to ask somebody else what they think because I’m a little biased.

Why The Green Face?

The Green Face was an idea that my manager and I had in the earliest stages of my career, and we used it as my logo. We had the vision of the yellow smiley face that you see every where on shirts, it’s yellow and happy and friendly. We wanted to make it a different color and green is my favorite color, so we chose that. And we definitely wanted the eyes and the smile to be kind of twisted and strange. It’s almost like my little mascot.

What is ‘The Wonderful World Music Group’ and ‘The Academy’ what is your place in both of those co-operations is it a co-operation? Those it have a distribution deal?

“It’s a Wonderful World Music Group” is 9th Wonder’s label and it has two subdivisions, JAMLA & The Academy. I am an artist on The Academy. We have distribution through ABB Records in California.

As you go to Yale at North Carolina University did you always plan to do music?

I dont go to Yale or North Carolina University but I have wanted to make music for a long time, it has always been a dream and a goal of mine. I’m lucky to be getting crazy opportunities to pursue that goal.

What have you learned from studying at Yale. WHat do you learn from lessons with 9th Wonder? If so can you tell us on thing he has taught you?

9th has taught me a lot. The virtues of being patient, keeping an open mind. He taught me how to rein in my voice and not yell into the mic when I record. And working with him gave me extra incentive to go hard on every track that comes my way, because of all the other great rappers, my labelmates,  that are around 9th and around me during any given studio session.

I think my iPod holds like 16 gigs and its always full. I’m always having to take music off there to fit new stuff. I’m very particular about how my iPod is organized. I have to have the album art beside all the songs and everything has to be tagged and labeled the right way. I’m OCD about it.

What’s the first song that comes up on your iTunes?

My most-played song on iTunes is actually “3 am In The Morning” by UGK, off the Ridin’ Dirty album. Pimp C’s flow and delivery on his verse is retarded. I didnt realize that it was my most played song until just now.

What is the need of bringing out mixtapes when you can just drop an album now and produce a classic? Do you think you can drop a classic without dropping mixtapes?

It’s definitely possible to drop a classic without dropping mixtapes. But the reason for making mixtapes is that before I create an album, I need to have a fan base established that will buy that album. You cultivate that following of fans through releasing mixtapes and by being approachable and corresponding with your fans in person and online. They get your music for free and then they pay to get in to your shows. Mixtapes are a great promotional tool but the music in my mixtapes also carries a lot of weight.

Do you think you have in you to produce/bring out a classic?

Of course, otherwise I wouldn’t be making music at all.

Where can we catch you?

You can catch me chillin, in my bungalow. But actually I’m on a tour called Sneaker Pimps from now until mid November, we’re hitting 5 major cities and doing the events out there. It’s going very well so far. You can definitely catch me out there.

Any music of Thee Tom Hardy can be caught right here on Friedmylittlebrain.com and his website www.theetomhardy.com.