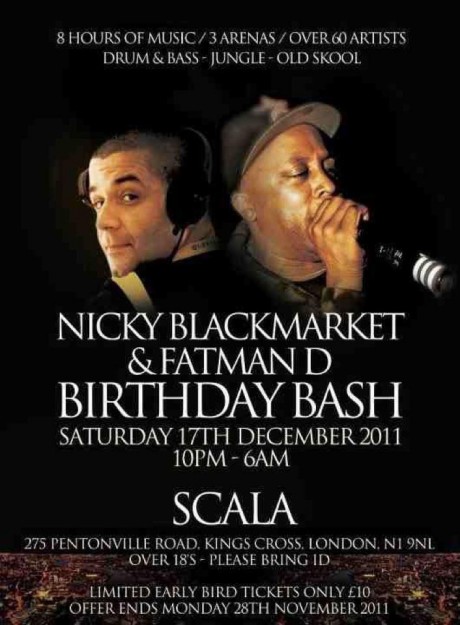 After the success of his birthday bash last year in Birmingham’s Custard Factory, New Breed Crew’s Fatman D has teamed up with the legendary Nicky Blackmarket to bring to you one of the biggest raves before New Year’s Eve. Returning to London city on December 17th and taking over 3 arenas at Scala nightclub, the line up of 60 amazing Drum and Bass artists will make this one to remember.

Taking over Room One are Fatman and Nicky themselves, Grooverider, Skibba, Majistrate, Hazard, Foxy, Shabba and Logan D to name but a small few. Room Two will be occupied with an ‘Old Skool Mania’ vibe with sets from the legendary Kenny Ken and Slipmatt amongst others and Fatman’s agency, the mighty Biological Beats will do a label and agency showcase in Room Three.

For full details of the line up check out the Facebook event page in association with DEF:INITION events.

In the mean time to get you in the mood for a night of raw Drum and Bass and MCs who’ve been on the mic since day, check out the Crissy Criss show from Wednesday 7th, where Fatman D and Nicky Blackmarket popped along to BBC 1Xtra for a special guest show.