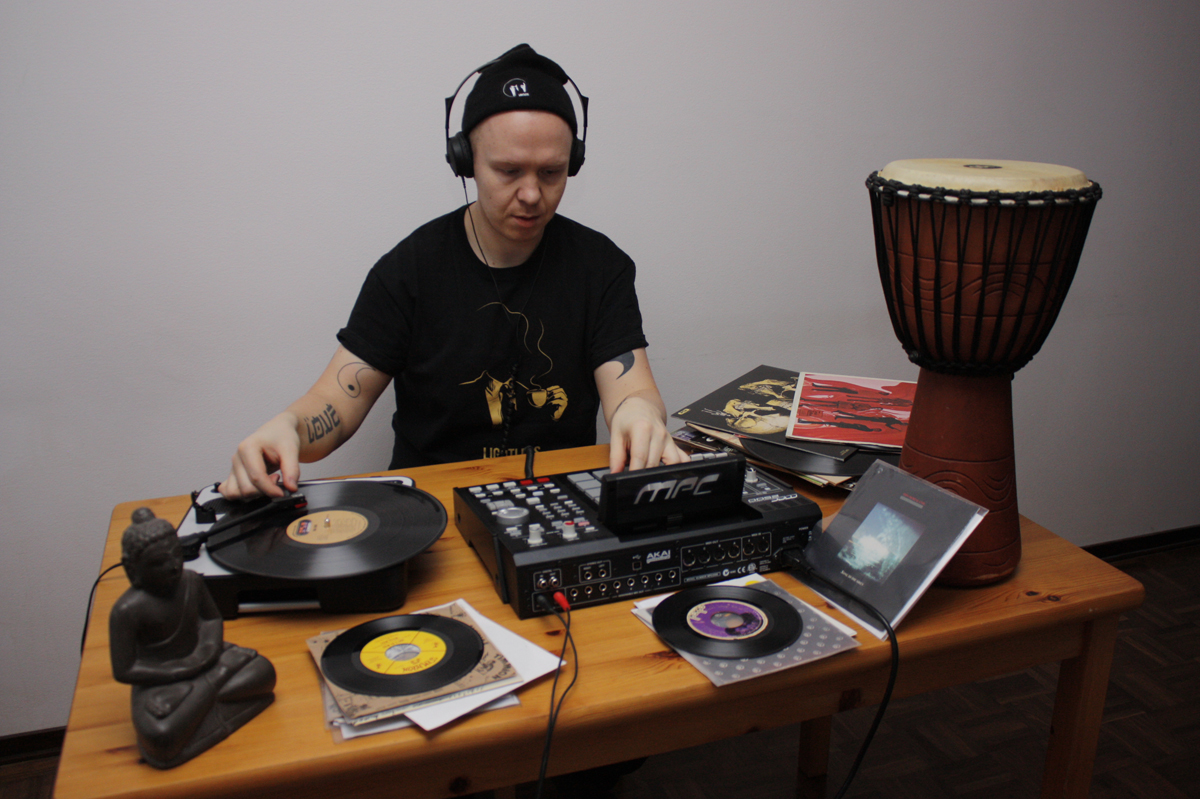 I spoke to Fanu about his recent and forthcoming material, some of which is hip hop/MPC/heavily sample based. I asked him about using ‘older’ gear…

F: You know what they say: it’s not about the destination – it’s about the journey. It’s like grinding the coffee beans yourself: it’s dope and it’s part of the process.

I’ve definitely realized I sorely missed using a hardware sampler. It’s all about how it feels. Hell, I even love the smell of the material they use. I think all these feelings are gained through some perspective. I remember when I took a step to going all digital and I thought it’ll be all I’ll need but hey, look what happened. Recently, I also bought a TL Audio Fat Track for some analogue dirt, and I’m just about to buy an old Akai s2000 again just for oldskool sampling badassery.

DB: So tell me more about your hip hop style/MPC project?

Also, to me it’s especially about sampling things into a sampler as well as chopping things manually instead of dragging and clicking files on a computer screen. I must say I’m coming up with stuff on the MPC I wouldn’t have done with a digital computer sequencer… but the whole process is different, the journey.

DB: Is it the purity and instant results that you like?

F: It’s definitely true. It’s funny how quickly I can come up with a dope beat and a bassline with an MPC. Also, I’m doing stuff with it that I usually don’t do in a digital domain: for some reason – and I can’t explain it – I never really make hiphop beats when I’m working in an all digital domain, but the MPC makes me do just that. 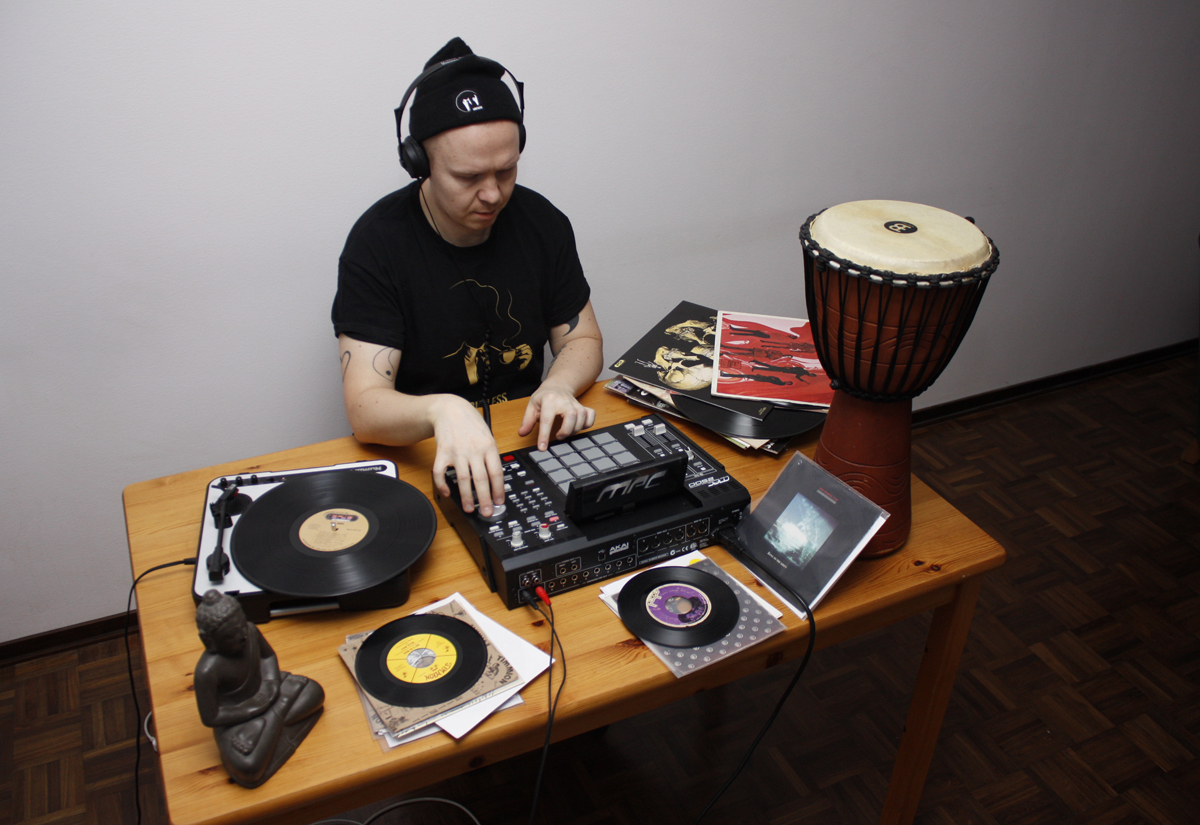 DB: What else goes into the musical blender?

F: I’ve been sampling huge loads of vinyl, too. I’ve been visiting flea markets and carrying around a portable turntable, listening to records to discover samples. I bet it’s partly about the samples, but it’s definitely also about Akai, as I can tell stuff I do with MPC resembles the material I did with my old Akais in terms of the sound: it is kind of “pure”, organic and raw. Also, a high-resonance lowpass sweep done with an Akai sampler cannot be beat with anything else that’s out there. Period.

All that being said, I’ll add I’m not going back to hardware samplers exclusively as I’m still definitely using Ableton Live.

F: Organic sounds have always been my main interest, no matter what I’ve made music with. I have used some synths but organic is mostly the key. I take pride in original sampling – always have. It’s always been an essential part of what I do. Even though I’ve always liked electronic music, I’ve found the most organic-sounding tunes the best: just like a lot of early D&B was, compared to today’s D&B, a lot of which can sound more digital and drum-machiney, which isn’t that bad but I’ve got my preferences and I can’t shake them off.

It’s about bringing up a natural-sounding timbre, and as little layering as I usually do with drum sounds, I tend to use natural drum hits and not drum-machine ones.

DB: Do the D&B/hiphop projects exist side by side for you? Part of me wonders if it, fused, would make an awesome flowing album in itself!

F: Those two projects coexist for sure. But they won’t be fused. One reason being they’ll sound different, and they’ll almost represent different states of mind. Maybe they’re trying to show and ‘achieve’ different things. Funnily enough, I even work on them in different rooms. I’ve found myself working on the MPC album in my living-room with my headphones on, pulling out vinyl from the shelf, sampling stuff and going with that.

DB: Has your production or attitude to production changed in the last year?

F: I’ve become increasingly more mixdown-conscious, which is partly due to experience and listening to things but also due to getting better gear. I’ve upgraded my monitors, got a good sub, decent headphones (shoutouts to Audeze) which alone result in your hearing things better. I definitely had a phase where I put a lot of time on mixdowns, and I think it can be heard on my last two EPs, Coffee Crazy and Breakbeat Brew.

It can definitely be a fun-killer if I go TOO deep into it – I can, and I’ve been there.

DB: How would you evaluate yourself?

F: A stubborn niche artist capable of making fat beats who’s stuck with his nineties roots. How’s that? I guess I’ve always been a very non-trendy artist that’s hard to put in any slot. I’ll stick to my guns.

DB: There’s the glimpse of the album ‘Northern Movement’ (above) so what’s plans coming up for you & your label Lightless?

F: I’ll be doing a remix for Two Fingers aka Amon Tobin for the hiphop album; I’m honored as it’ll be my second remix for him.

Laurent Garnier is into my last EP (Breakbeat Brew) saying he thinks it’s amazing. He’ll be playing some of it, maybe ‘Monkey Got Choked’ (scroll back) on his radio show, and was asking for more music from me.

I’m brewing a Finnish D&B compilation for Lightless called ‘Breakbeat Sound Of Finland’. We’ve got several producers submitting material for it as we speak, and I can tell you it’ll be a nice, varied packages.

Compiling the compilation has made me realize that there are quite a few D&B artists in Finland, many of whom happen to be in the metropolitan area. Many of the producers on the upcoming compilation are also DJs so I think D&B-wise it’s all in good hands here.

Also, I do a monthly D&B radio show in Finland on Bassoradio with my sidekick DJ Docius, check archives on fanumusic.com