Eyes of a Blue Dog interview 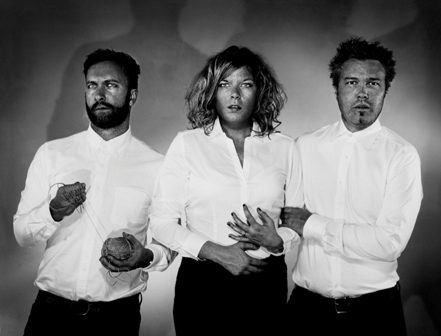 I spoke to the trio Eyes of a Blue Dog as their second album Hamartia drops.

DB: Can you tell us about yourself?

EOABD: We are a three piece band from London/Oslo and Trondheim.

We met in London, became good friends while working on other projects together- and then decided to form this band through mutual interest in electronic music/ambient music and alternative pop music.

Hamartia is our second album; we play all the instruments on the album. Apart from bass and violins.

DB: Who does your artwork?

EOABD: Our press photos were done by an amazing Norwegian photographer called Jo Michael de Figueiredo and the annotations and graphic design by a great young British artist called Sarah Wharton, from Canterbury… by way of Peckham.

EOABD: We love Berlin for its art, style and people.

We love Portland, Oregon for its craft beer and beards.

We love Barcelona and San Sebastian for parties and food.

DB: Where do you play out and what do you do live?

EOABD: When we play live, we try to keep as much of the live element of us as instrumentalists there as possible. That’s where we are coming from initially, Terje as a drummer and Rory as a guitarist/trumpet player.

And Elisabeth is also given the freedom to improvise with the shapes of the music and keep things organic.

But with all this in mind, we still try and keep the ‘sound’ of the album in mind, and want to make things as immediate and deep as possible.

That is, make it f*cking loud when we can….

EOABD: This album is mainly about sin, flaw and temptation. So that’s including lust, passion, drugs, sex, the important stuff. The name of the album, ‘Hamartia’ comes from the Greek word- meaning fatal flaw of a hero. But we might write a more polite album next.

But for now it’s sex and drugs.