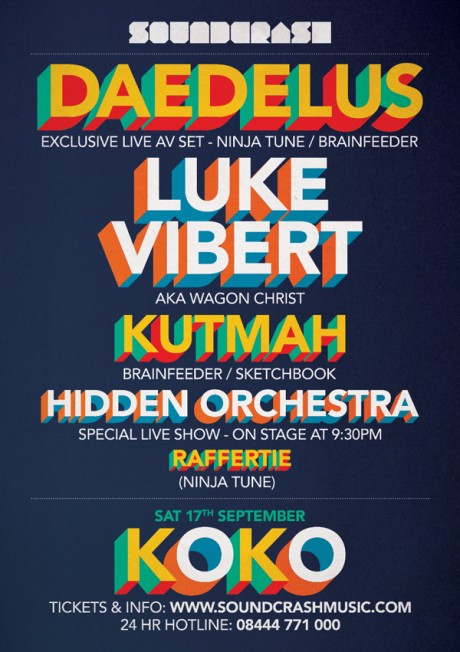 Daedelus will be doing an exclusive live AV set, whilst Luke Vibert will be delivering the goods with a healthy dose of acid bleeps and supreme wobble basslines.

Kutmah, who cut his teeth at the legendary “Low-End Theory” nights in LA whilst playing alongside names such as Flying Lotus and The Gaslamp Killer will bring his ruthless mix of reggae to dubstep, through punk and hip hop as he seamlessly merges the heavy beats.

Raffertie, Ninja Tune artist, Super Recordings label head, Producer and DJ will be bringing some live loud sounds with a flurry. It’s been a while since I’ve seen him play and excited to hear his sounds once again.

Last but not least we se Hidden Orchestra come true with their live show featuring two drummers and a mixture of deep electronic music and a small sprinkling of Krautrock. Get down early to catch them play.