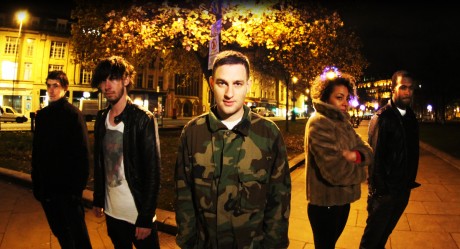 ‘Fighter’ by Dr Meaker is now out on V and features an array of remixes. I caught up to talk about it all and also got some priceless ‘cut out & keep’ insights into the ‘live’ approach.

DB: ‘Fighter’ sounds such an instant, simple track. I always think: it sounds like it fell together quickly, was that the case?

DM: You’re partly right. The musical parts; string driven chords and Lorna’s vocals all fell together literally in a few minutes but it took about four years to actually finish the track. It was all about getting the drop right. I did about 10 different versions of Fighter but could never quite nail the drop exactly as I wanted it to be so I decided to bring in a co-producer (Octo-Pi) to work on that heavy drop. Once that part was there I was able to finish the arrangement and nail the track really quickly.

DB: You mention Octo-Pi and there’s others on the collab front, so how is the local music climate in Bristol right now?

DM: Bristol is always an amazing place to be musically, there are some great emerging artists coming from the city and it is all creating a wicked buzz for the city. As mentioned, for ‘Fighter’ we worked with an amazing producer Octo-Pi who is also making moves in his own right. We surround ourselves with like-minded talented artists and producers. It is a strong community and its great to see everyone doing well in their respected fields.

DB: Are you a part of the ‘Bristol Sound’ as such, would you say?

DM: We are led by what is traditionally the Bristol Sound; groove tracks, dub orientated bass lines, organic instrumentation and soulful vocals, with our own twist

So I would say we are a new part of the traditional Bristol sound, growing up on bands like Massive Attack, Portishead, Smith & Mighty & Roni Size, they were a huge influence to a lot of the band members. It’s gone full circle now and we have been supported by Roni Size who has been caning ‘Fighter’ and we have also had our work remixed by Rob Smith and have mixed tracks in Portishead’s studio in Bristol. Just need to do something with Massive attack now and that’s the list ticked off! We’ve also been collaborating with Kosheen Vocalist Sian Evans which has been wicked – so expect to hear some of that Sian magic on the next album.

DB: Back to the single, is it a standout killer in the live set?

DM: ‘Fighter’ always drops hard in our live set and it does definitely represents the harder side to our music. It is very beat and bass line driven. We love playing this one live and its great because we feed off the energy of the crowd and the crowd always goes fuckin’ crazy when we drop it! Vibes!

DB: What sort of thought/planning went into the video?

DM: For this video Andre Ramos (Director), Lorna (vocalist) and Clive (producer) sat down in Clive’s living room and bashed out the video idea. We initially had grand plans to make the video Epic in terms of locations – deserts, rainforests, mountain tops, space ha ha – but then reality hit home and a lack of funding meant we had to keep it simple. The video represents the song as it has elements of dark and uplifting moments. We actually had some small cameos in the video and it was a fun night of filming as we all got pretty drunk whilst on set so the video was actually a true representation of what happened!

DB: Back to live work, how do you pull it off, make it valid? Sometimes ‘live’ can mean just a live PA…

DM: It can be very hard to pull this off in the live format. We make it work because we’ve been playing shows for many years now, experimenting with our gear, working out exactly what works and what doesn’t and each gig just gets better and better. We do not play simply on top of the backing: we make sure that we learn every part of the track and all of the intricacies. If you are not locked into every part of the backing it will not drop at all in the live situation. It’s all about working as hard as we can and rehearsing as much as possible. Using live analog synths, bass, drums, vocals and horns covers all sonic sweet spots and visually makes it very organic too.

DB: Can you break down your live approach?

DM: For us it starts with the transition from the studio tracks and forming them into the live set up and changing arrangements of songs accordingly for the club/venue situations. Once the arrangements are in order we take them into the rehearsal room, where there still can be some late arrangement changes depending on again how the tune drops and what sections do not work so much for the live situation.

We do not use standard computers in our live set as when you rely on computers we all know what can happen there! So we use the Roland SPD-SX which had a solid-state hard drive. A lot more reliable! We also run some elements off Tom, our drummer’s Roland SPD-SX Sampling Pad. When everything is rehearsed we are then ready to take it live to the fans.

DB: And what are some finer points of making the set solidly work?

DM: Soundcheck can be a crucial time before a gig: it is the difference between having a good gig and a great gig. If the members do not have what they need in their monitors beside them on stage it can be very difficult during the performances as they need to hear what everybody else is playing. We just make sure we each know what we need in the monitor and get the levels as near to what we want as possible.

DB: The reality of playing festivals and big bills means your stage times get changed or nudged, how do you cope?

DM: Changing the set due to onstage times can be frustrating at times purely because we love playing live and we want to give the audience as many tunes as possible during our time slots. But for every show we are always changing the set list and dropping tunes and replacing them with new ones. It’s nice to change it up every gig.

DB: Finally, I note Brazil’s Unreal is present on the remix front, how did the remixes come about?

DM: The remixes were organised by ourselves and V Records. We wanted some of the best producers to back up the release and we got some great artists involved on this one. Everyone seems to have their favorite remix on the record. They are all bangers!