Reigning from the city that never sleeps Brooklyn, New York Sene hasn’t had time to sleep. Reality does actually Bite, moving to the West Coast area has really given Sene a chance to shine. The West Coast is a very welcoming place for independent artists, especially talented ones. Always improving his craft as an MC Sene has been seen working with artists such as Blu, Sean Price, Prince Po to name a few. This prosperous young rapper is on looking for big things now with ‘Reality Bites’ with guest appearances from the mixtape are Von Pea (of Tanya Morgan), Co$$, Tunji and Outasight. Beats come courtesy of Hannibal King, Transzformer, Jay Forbes, Terem, Insightful, Blu and Cook Classics. Trust me on this from your one and only Hip Hop specialist from Team Fublo this is real Hip Hop. 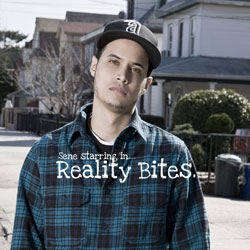