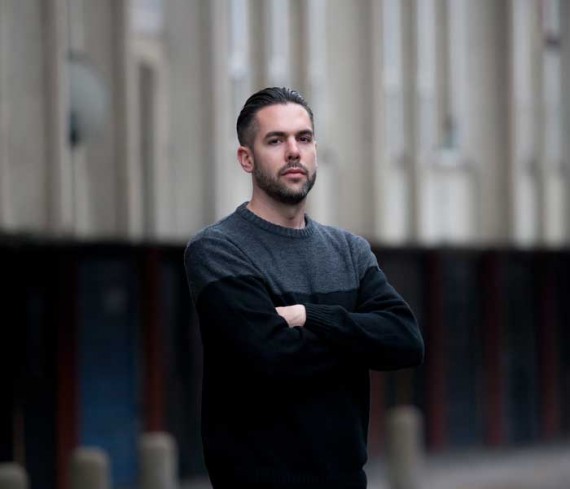 I caught up with Vapour about ‘Rhythm Flow’, ‘Bunker Buster’ and what’s happening in general over at 36 Hertz with big releases by Sanz, Jem One and with essential words on the mastering front.

Vapour, it’s a busy year so far, you have some killer releases on the label and I am loving it all… what sort of things are going down?

Well, we kicked off the year with SR & Digbee’s long awaited debut LP Turning Back which we released through the month of Jan split up into three sections then the full LP at the end of the month. The LP got a great response from DJs all across the D&B spectrum with some superb feedback.

We are just in the process of putting together a remix package of some of the track from the LP so keep an eye out for that in the coming months. After that we dropped releases from Indigo Virus, Jem One and a Flashback EP from myself all through Feb.

Next up we have a whole batch of releases dropping kicking off with myself with ‘Rhythm Flow’ and ‘Bunker Buster’ then straight into releases from Sanz, SR, Jem One and then a Flash Back 4 track EP from SR.

You master all this right?

Indeed I do; 36 Hertz mastering has been going for a few years now.

It started off with just me mastering our own releases after we stopped pressing vinyl then people started asking who done our mastering then they were asking if I could do theirs for them as well so I set up a mastering section on the 36 Hertz store. After a while it got so busy I had to set up its own website which is now ten times busier than the actual 36 Hertz website ha ha.

It’s actually something I really enjoy doing and now it’s got so busy I tend to do a lot more non D&B music than actual D&B tracks but its great to work on such a large spectrum of music every week.

Tell me about the gear you got?

I have a full vintage analogue studio set up rather than working on the same stuff that everyone else uses – I actually spent over 12 months tracking down various pieces of equipment just for the set up then another three months getting it all set up and working how I wanted it to.

The core is a vintage Hill audio mixing console which is rare as hens teeth and has an amazing sound to it.

People can check out our website for more info

So what should people know about when they produce with mastering kept in mind, big obvious ‘don’t dos’ like making hi hats too loud or something that you can’t fix later in mastering?

Over-production is a major issue in D&B these days – everyone mashing the fuck out of everything with limiters and compression all in the hunt for loudness I get sent A LOT of bad pre masters of D&B tunes but oddly it seems that other genres are not as bad and actually care about dynamics in tracks.

Take us into your tune ‘Rhythm Flow’, it’s lashing, who’s been supporting this?

Honest answer would be I don’t know! Some D&B DJ’s rarely bother to give feedback and I don’t go out to raves or listen to D&B on the radio so I have not got a clue if any ones even been playing it ha ha.

I do have to give a shout out to all the guys on Kool London though as since I started the 36 Hertz show with Indigo Virus which is on fortnightly weds afternoons 3pm – www.koollondon.com… we set up a group for all the Kool DJs who are all really good at hitting me back and supporting the music so big up to all you guys for taking the time to get back to me

And what inspired the mighty ‘Bunker Buster’?

I have been making a lot of what I would call Bristol rollers: simple rolling break and a nice rolling bass groove recently.

Things like ‘Bubblegum Riddim’ and ‘Bunker Buster’ was one of those beats. Back in the 90s there used to be a lot of those rolling kind of sounds coming from the Bristol side with people like Roni Size, Krust etc all making these wicked rolling tunes with simple elements to them. I just been trying to make some stuff like that

What sort of things in pipeline we got to look forward to from you guys?

A lot more music – Indigo Virus, Era, Jem one, SR – and possibly Digbee! – Delphi, Sanz and myself are all busy beavering away working on stuff non stop this year. We are working on a few LP projects as well for later this year which will be interesting and who knows what else will happen in the mean time.

I really have a bee in my bonnet about building another sound system at some point – I used to run one before but certain peoples greed fucked that up and it’s long gone but I have started thinking about a proper 36 Hertz rig but that’s a long term plan but it would be great to get a proper system to go out and tour with that would rep the labels sound as heavily as I want it to be.

The label’s been doing really well over the past two years and we keep growing with sales going up every month so we are just focusing on building that up as a family. All the artists are mates and every one of us wants to build the brand and get bigger so its all about the teamwork and forward motion at the min.