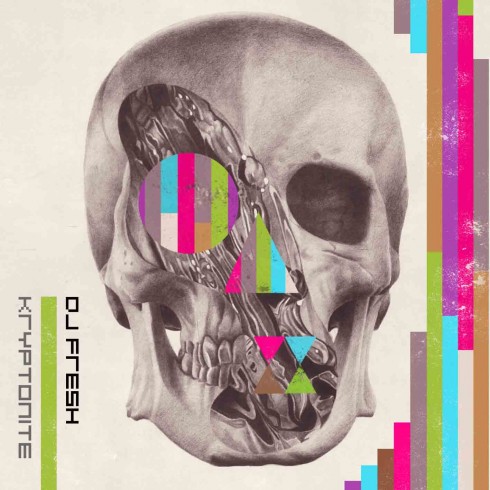 I’ve been promising myself – ever since I got the promo a few months back – that I’d do a review of it before it’s release. So, leaving it a bit late, but – it’s set for release on the 16th of August on Breakbeat Kaos and I have to strongly suggest to get on it.

Now, if any of you have read the interview I posted about a month ago, you would have picked up on the fact Fresh has moved his album away from a “pure drum and bass” release we are accustomed to, we see him dabbling in vocals and even a few tracks are entering the dubstep and drumstep realms, so if you’re not a fan of dnb don’t rule this album as not for you just yet, it may just surprise you.

The album opens with the frenetic, yet catchy Talkbox; which grabs you by the balls, tells you to sit down and listen, you can only follow orders and bob your head to the ensuing storm of undulating bass. Then Fresh moves us onto Lassitude, which is the first example the album gives of Fresh’s experimentation with vocals, which I felt worked well with his excellent drum and bassing skills. The album’s namesake is next; Kryptonite. This is a tune I’ve still yet to fathom out whether I like it, it’s dnb with an edge, a kinda strange electro vibe, that I found really word, and I’m yet to figure out if it works or not – which probably means a no from me, but towards the end of the track I begin to feel it again. This track is a mystery to me, but is indicative of where Fresh is going with the album, experimental, pushing his tastes and ability to try and create, you guessed it; something Fresh.

Then, Gold Dust. If I’m honest, I’ve got pretty tired of this track, as I have heard it many times on the music channels aside from my own personal listening of the album – undeniably, it’s a hit, the sales of the single tell you that much – but it doesn’t have time on it’s side. Enjoy it whilst you can.

After the tenseness of Gold Dust comes Acid Rain. Which opens with blissful vocals, leading up to a dark, slightly slower tempo drum and bass style track, it’s a solid track which is neither something to write home about, but you have no problem listening it through. But, the vocals do re-appear in the middle, which I think is a great touch – giving a quick reprieve from the darkness, which soon swallows you back up.

Hypercaine follows up, returning to the style of Lassitude with the vocals  – which if I’m honest I still love… less of a drum and bass track, more of a dance track with the dnb twist in the background, which Fresh still makes work.

Following up close behind is Starfall, which – looking at my play count – is the least played of all the album, which I think might be down to the fact, despite the promising vocals, this bass heavy dnb track is slightly monotonous for me, it gets the head nodding to start with, but it struggles because it lacks variation and gets tired towards the end.

Next is Chacruna, a personal favourite – shows Fresh delving into dubstep, granted it’s not the work of an experienced dubstep hand, but it shows promise – it’s a well balanced track that works for me massively, chills me out and I love the vocals that come with it.

Then, my my, we have the track Fight, another excursion to dubstep world for Fresh, and again I have a real soft spot for this song with understated but excellent drops, with vocals that only compliment it, strong track.

Finally, Fresh finishes off with a full on dnb track; Heavyweight, the classic rapid snares we have come to expect from drum and bass. All in all, it’s a strong album with a lot to offer; tunes from the dancier end of the spectrum, up to dark dnb and even dubstep. I can say every song will be loved by someone, somewhere… and that someone could be you. So take the chance, enjoy.