DB: I’m not one to go on about ‘textures’ or whatever but must say there is this certain full-blooded analogue vibe about your sound. You got hip hop influences? Just this analogue flex I really love.

Dabs: Yeah I would say that! Hip-hop and funky breaks in general influenced me a lot in production. I’m not much into 100% synthethic drums or hits indeed, they just need to keep some original organic feel but still be punchy and heavy. I used to produce hip hop instrumental when I was younger, then Ed Rush & Optical took me to another way, till nowdays…

D: I absolutely love DJing, that’s how I started. I enjoy it so much in the club when I realize that my work paid off. So yeah, I always work with an eye to dancefloor when I’m in the studio. What comes out of there’s gotta be solid. 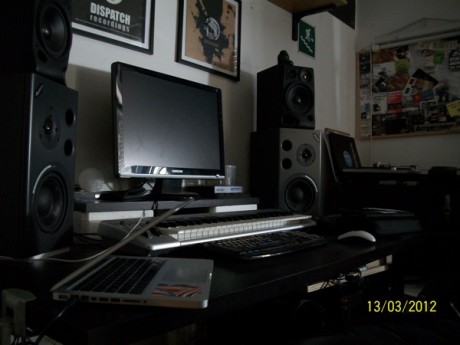 DB: Do you listen to much other than D&B?

DB: You’re based in Italy?

D: I live in Rome. There’s not a big D&B scene over here except some parties.

DB: What sorts of spots local would you recommend?

D: As club I recomend ‘Brancaleone’, ‘Init’ and for the next season hopefully the ‘Muzak’, in Testaccio where I’m planning a monthly Avantgarde night.

… btw don’t get me started about Rome, I love the place. What about eating tips?

D: As a good Italian I love food. Nothing better than pizza or tramezzino after a night in a club that helps you with the day after hangover… take note, Italian recipe.

D: And yeah I love cooking, it’s a kind of ritual over here! especially pasta and seafood.

DB: I know you’re a purist re D&B but… fave album ever?

DB: What release schedule you got?

D: There’s the Dispatch ‘Subsidiary’ EP coming out 19th of March as two 12s; a couple of 12s just out on Syndrome Audio and Horizons Music, featuring Amoss, Cern and Safire.

There’s a remix of a Cause4Concern tune which is gonna be out very soon.

Also the label I run with Grotesque, ‘Avantgarde’ has a second 12 with ‘Hideout’ feat Safire and MC LowQui which received massive support around, for example it was played by Icicle in his last Shogun podcast. Plus remixes for Horizons Music, got some other tunes in the works with Cern, Safire, Amoss and Maztek plus some releases planned on Dispatch and Optiv’s Red Light.

DB: Are you in the UK soon?

D: The UK date so far, I’ll be playing at Momentum night in Leeds Friday 25th of May, Bristol to be announced.