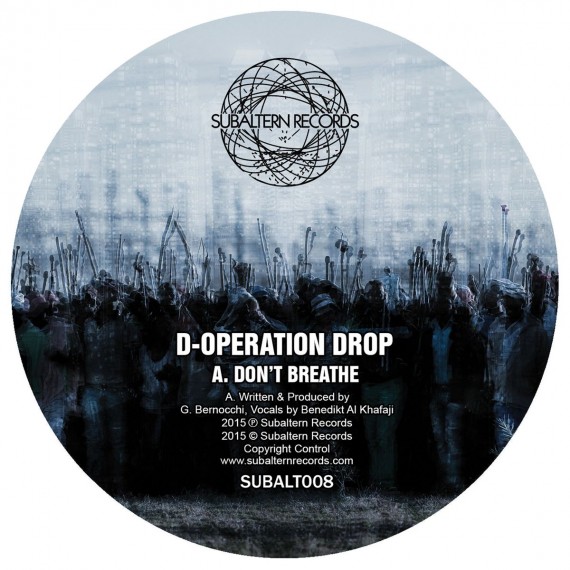 I spoke to D-Operation Drop as their deadly ep drops on Subaltern.

DOD: We started producing with the collective as D-Operation Drop back in 2010. Some of us had already experience making hip-hop beats, some others had various other influences like Dub, Reggae, Rock and Drum & Bass.

Dubstep for us came naturally as it’s a genre which gathers elements from all our favourite styles of music, so D-Operation Drop started.

DB: On the ep can I go in on ‘Indira’, what inspired? This is a wicked track.

DOD: With Indira we wanted to experiment with something new. We tried to build a fast intricate rhythm, something crazy but also suitable for the dance floor. With that in mind we wanted to fuse elements of Techno, Dub while sticking to a Dubstep concept.

DB: What is a track you would cite, to talk us through.

DOD: Definitely ‘Don’t Breathe’. This was the first track from us which got supported from J:Kenzo on RinseFM, the vocal is some sort of a political statement against the unbalance and misunderstandings between the people and governmental institutions, especially in Italy.

We’re really fond both of the original and the Wayfarer remix, and we feel this track really represents what we are about.

DB: What’s some beats in general and dubstep you are checking right now.

DOD: We’ve been listening to a lot of Hip-Hop lately, particularly instrumental and experimental stuff. Producers like the Italian duo Dusty and Rudy nme have managed to create an original sound with tasteful jazz samples complemented by fat beats and full subs.

We also listen to a lot of Dub: we’re lucky to have Italian artists like Moa Anbessa, Dub Engine and Mellow Mood, who strongly push the Dub culture and also people like Egoless and J.Robinson.

Grime, Garage and UK Funky are also on top of our lists, especially labels like Tumble Audio and Certified Bangers.

In the Dubstep scene we are really enjoying what labels like Subaltern, Artikal and Innamind are putting out at the moment. The sampling skills and intricate drums of Gantz and LAS for example go well over the concept of Dubstep, making them some of our favourites artists in the scene.

DB: Actually what tune is in your head right now?

DB: Where are you playing next?

DOD: There’s a couple of gigs confirmed in Catania, Sicily, where one of the members of our collective lives, and we also perform regularly in our city, Cesena. We are all really busy finishing our studies, but we’re planning a possible Germany Tour, hopefully before the summer.

In August we’ll perform at ‘Nebrody Art Fest’ Festival in Sicily, where there’s also going to be some UK artists involved.

DB: Thanks any shouts?

DOD: First of all J:Kenzo, for supporting us and believing in our music constantly for the past two years and for releasing our music on Artikal and Lion Charge.

Mentha, Jobanti and the Subaltern Family for their support since the very start, the Bacon Dubz crew and last but not least the Italian Bass Family, Numa Crew, Foster, our super Piezo, Madplate Sound and all the crew.

Also out to you FriedMyLittleBrain!