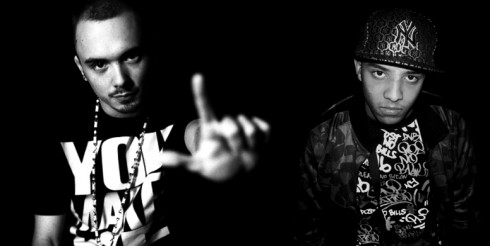 Crissy Criss: 1xtra DJ and D&B hypermix demon. Always great to hear the friendly stand-offs between him and Bailey on air.

Youngman: MC and seasoned lyrical demon having been on the road and way up in it with the legendary Simon Bassline Smith. All hail.

Sooooo. There were rumours about an album and sure enough it dropped recently on Technique. Technique!!!! Fall back. If you don’t know this label you have missed out on some of the most galvanised, blistering D&B around over the last decade.

The album’s ‘Give You The World’ and it ranges all over the place: think Dillinja, hip hop, soul, certain moments on Headz, Formation and a completely punk rock approach to dubstep. And it just seems to get crazier as it goes on.

Let’s get into it shall we?

Damian Bennett: This album is brimming with a vibe that you had to get it out there, to just slam it down. It’s really immediate. Is this what you intended?

Youngman: Well, Yes and No. There are certainly tracks on there that are defiantly in the now, however there are some timeless tracks that I know will last long into the future.

DB: So ok, when did the idea of a collab come around?

Crissy:  Basically Youngman needed some singing lessons so I offered my expertise to help him out and make him who he is today. Only joking!

We mainly hooked up through our dads. I knew Bassline Smith, he knew I was producing and he mentioned his son also DJs and sings. He said “You two should hook” and the rest is history. On the album side of things It was around two years ago, we’d just done ‘Take You Higher’ and after putting it out there the response was so crazy from DJs, labels and radio that it just kind of made sense.

DB: OK, but for me it’s stuff like ‘Turn It Up’, ‘Stop’ and ‘Treat You Like A Lady’ which each murder in sep ways. They really have a strong ID.

C:  It was basically really important for us to get this batch of music out there though and trust me: there is A LOT more material in the vault.

DB: Hey what with everything going off, you both have pretty hectic schedules yes? Please tell us about what you do.

DB: Not sure what else matters really.

C: It’s hard to do anything really social at the moment, soon as I wake up it’s straight to the studio or straight in front of the laptop going through new music and doing mixes for my radio shows or for the weekend. The list goes on. But when I do actually get some time it’s all about spending it with my misses and a bit of Black Ops.

DB: What’s behind the album? A real sense of you having fun with it comes through and becomes more and more evident as the album goes along.

Y: We called the album ‘Give You The World’ and the stimulus was simple:  We want to show you all Our World, the music we like. Snippets of our lives right now. I can’t think of a time Crissy and I have ever had to struggle to make music. It’s really natural, and we’re always having fun with it which I think comes through in the record.

C: Yeah that pretty much rounds it off: ‘Give You The World’ is just us and just a part of what we can do and make by being ourselves.

DB: Who comes up with the ideas initially to get the tune rolling?

C:  Usually I send Youngman a loop or entire instrumental and he will write to it, but occasionally I work from accapellas. But like Youngman just said it’s always very organic. I’ll do a bit, then he will, then I’ll do some more. Then bring out melodies Youngman’s written.

DB: You guys love D&B so tell us some D&B from past and present that kills you.

Y:  I’ve heard so much D&B – even before it was coined ‘D&B’ – in my time through my dad. I’d have to say some of the earlier emotional music bits always got me such as Roni Size’s ‘Brown Paper Bag’, Adam F’s ‘Music In My Mind’ and all those LTJ Bukem & Conrad mixes to name a few.

C: I’d have to agree with Young also, sooooo much other big great tunes people have forgot about. I’m going to have to dig in the crates now you mention it!

DB: So what’s the 2011 got in store? Lots of people are excited. What’s it mean for you and also for the music in general?

Y: You can expect a big tour and plenty of new material from us in 2011. Also working on a solo project with Digital Soundboy so watch this space!

C: Just sooooo much that I’m working for right now that you will see in 2011. Watch out!