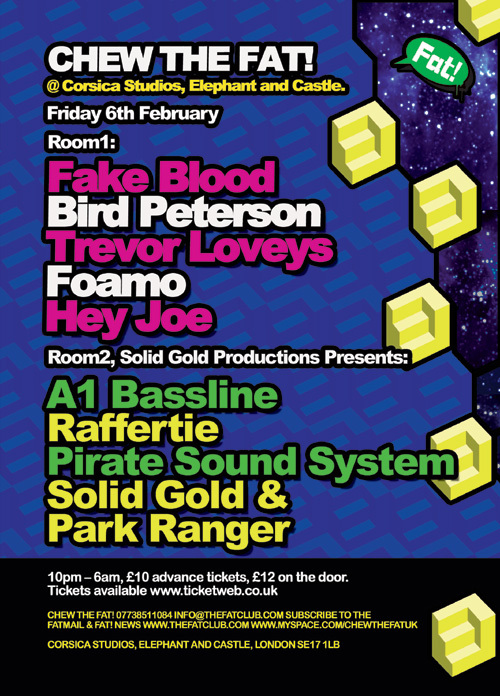 After a hedonistic night at Big Fat Trouble, and a riotous send off to 2008 with their New Year’s Eve Party at Plan B, Fat! return to the Corsica Studios featuring a slice of music that defines their sound! Get ready for bootybasslines across two rooms.

More information after the jump…

FAKE BLOOD – Anyone’s list of 2008’s best producers is sure to include Fake Blood. With a slew of first class remixes and edits, his music has become synonymous with the current electro sound. His track “Mars” has been tearing up dance floors across the UK and has been receiving support from the likes of Radio 1’s Annie Mac and, his remix of Little Boots – “Stuck On Repeat” was one of Pete Tong’s essential tunes of 2008. A mixture of grindcore and fidget house is sure to shake the New Year’s blues from even the most pessimistic person!
www.myspace.com/welovefakeblood

BIRD PETERSON – Carving his way through hot rhythms, swerving basslines and dance wizardry, Bird Peterson is set to hit our shores for the very first time, kicking off his European tour at Chew The Fat! His latest release, aptly named “Your Parents are Making Sweet Love” has been smashing up clubs throughout America. A true hero, Mr. Peterson is here to remind the world that there are still plenty of fresh and vibrant new acts in dance music!
www.myspace.com/birdpeterson

TREVOR LOVEYS – Becoming a Chew The Fat regular in 2008, Trevor returns for his first set of the new year. Renowned for his collaborations with contemporaries such as Hervè and Dave ‘Switch’ Taylor as much as his remix work for artists as diverse as Evil Nine and Roisin Murphy, Trevor is a genuine pioneer of the jacking house sound now conquering the globe. Keep your eyes peeled for plenty of releases in the first half of 2009 as well as Trevor’s debut mix compilation!
www.myspace.com/trevorloveys

FOAMO – A next generation producer who’s 4/4, bass driven tracks have been receiving huge support from high ranking DJs such as Radio 1’s Kissy Sellout, who played Foamo’s debut single “Moving It Over Here” repeatedly on his show. It’s been a meteoric rise for Foamo in 2008, and it looks like his reputation will only continue to grow.
www.myspace.com/foamo

SOLID GOLD PRODUCTIONS PRESENTS….. – In Room 2 for February we have another Bass Heavy bonanza. Joining the Trouble Vision residents (Solid Gold, Park Ranger, Oli DAB & Robin) we have Meal Deal artist – A1 Bassline touting his bass / electro tracks alongside dubstep new kid – Raffertie (currently in the studio working on his new E.P). Heading up Room 2 we have Pirate Sound System, who will be bringing their bass heavy beats to the fray! Keep an ear out for their brilliant remix of Wiley’s ‘Wearing My Rolex’.

For the latest DJ interviews and mixes check out www.thefatclub.com