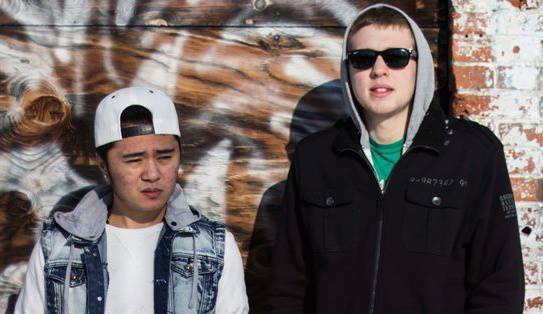 I spoke to Aurak Maurak Bomb as they line up along with War Machine on the new ep.

DB: Can you tell us about yourselves?

AMB: So we’re Aurak Maurak Bomb: two producers from Leominster, Massachusetts, United States and we both have been producing music since high school. We both actually started making music together in high school but the Aurak Maurak Bomb project came together after the rise of trap music and we just started to veer towards producing some awesome music. Currently we’re all over the place with our production and have a lot planned for 2015.

DB: Who are you aiming the tunes at?

AMB: For ‘Nitemare’, we brought in some heavy heavy influences and actually we produced this around the time Skrillex’s Recess album came out, after some heavy plays of that album we both just brought that energy towards this track.

For ‘Red Lies’, it actually started as more of a electro dance song more than D&B, but as soon as we found the vocal sample – which some may recognize – we decided to switch it up the drum patterns and it created a much smoother and relaxed sound as well as being high energy at the same time.

DB: How did you hook up with Violation?

AMB: We’ve actually been in contact with Violation Music a year prior to this release and they were looking for some new tracks for their label and we didn’t really have anything worth sending to them, but once ‘Red Lies’ was produced, we decided that this along with ‘Nitemare’ would be a perfect release with Violation and the rest goes with saying… we’re absolutely pumped that this is being released on a bigger scale than we thought! Hope you guys enjoy our tracks!

AMB: We’d like to shout-out Gareth War Machine of Violation for finding us and putting these songs on a bigger release. We have a lot of projects coming up. Panama Jak – half of Aurak Maurak Bomb – has some projects with JakK’D, New Legendz, Ysuli Bros, CZuR, Wubson and Jak Fuego out of the Boston, MA area that you guys should look out for. PVRTY – the other half of Aurak Maurak Bomb – has some solo projects in the works that you’ll definitely love.