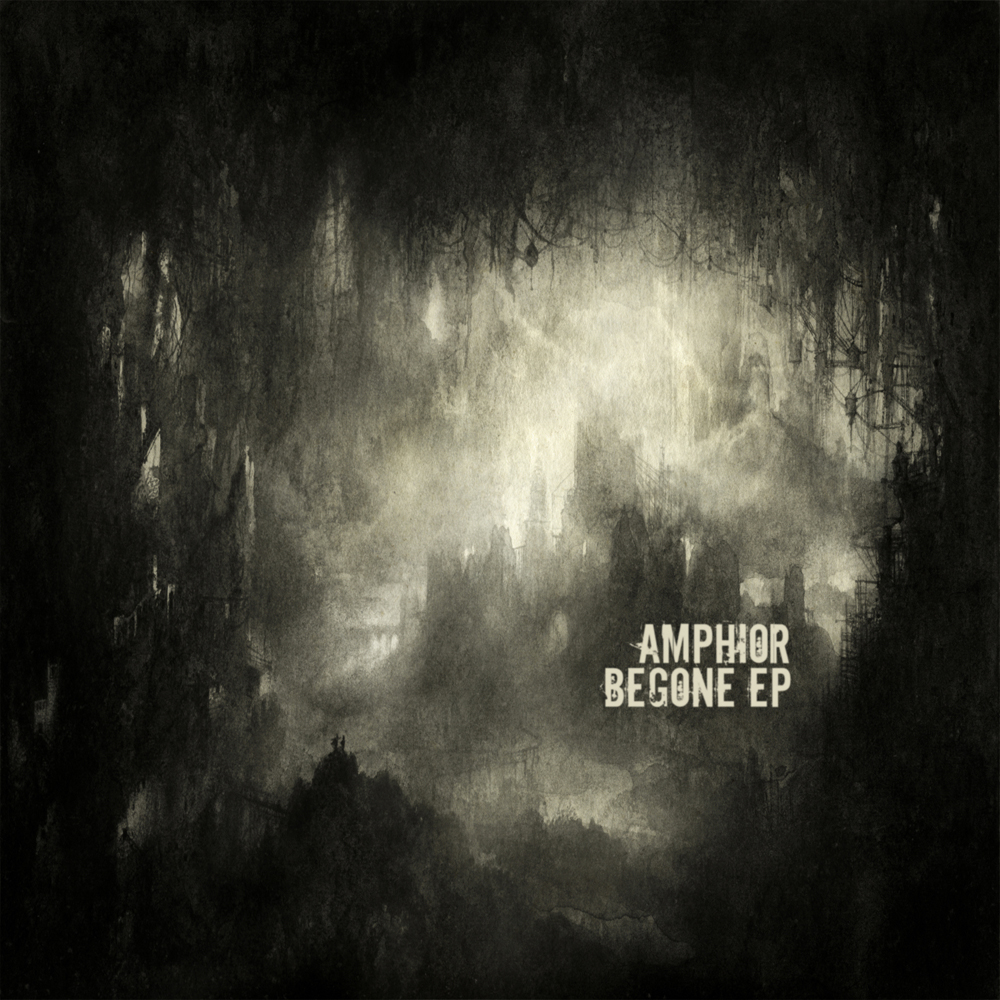 Amphior spoke to us about his new Begone ep on Loodma and went in deep talking about connecting emotions with music. We started with the cover artwork, above…

A: Sometimes you feel lost with yourself and you may be unable to tell exactly why you feel that way, but you know that something is going on. It almost feels as if something is lurking in the deepest depths of your mind, covering the truth of why you feel like you do and it’s like it becomes a secret to yourself. I wanted this idea to be in the artwork somehow, so I figured creating a distant and moody underworld would summon up how a troubled mind could look like. Then a couple of faces, ghosts or whatever you want it to be hide around in this place. I love the idea that something is out there lurking… breathing…

It’s super sexy and you’re just curious about it and wants to uncover it’s mysterious identity.

I’m really happy with this artwork. Jaan the art-designer from Loodma Recordings did an amazing job with this cover and the record just wouldn’t be the same without it.

DB: Can you isolate a tune and talk us through it, in terms of where it came from, what inspired it, whether done day or night… any nice detail is welcome! Any tune at all.

A: Sure, gonna have to go with the ending-tune of the record: ‘Endurance’.
This tune was made in the night-time like most of my work – I kind of feel close to the night. I prefer working then cause there’s no one to bother you or interrupt you while you work. It really fucks up a lot of other things when you make music at night though.

Basically I wanted to make a tune that was about hope and believing in yourself and that was a little more up-beat than the rest of the moodier and anxious tunes from this record. It’s kind of a day-dreamy tune. There’s a quote somewhere in the beginning that says “I see it” and right after that as the drums begin to roll, a recording of a train drives by and takes you away. Basically that comes from a glimpse I had. When I had made the tune, I imagined being drawn into a heaven/utopia-like world where everything was just… peaceful.

Living with an anxiety disorder means there’s a lot of worrying, so I simply wanted to make a tune that made me feel relieved for a while; a tune I could believe more in. But then at times in the tune it becomes more depressing. There’s a vocal-line that says ‘Tell me, where will I go?’ – A question that I’m honestly still unable to answer when it comes to the anxiety-thing but also a question I think a lot of people might ask themselves now and then. You might do something with your life and think it’s the right thing, but what if it’s not the thing you were supposed to do at all?

DB: You seem to love working on/with beats, is that the case?

A: I love drums in Garage music. I love drums in D&B and in Dubstep too, but mostly in Garage because of the way they’re rolling and shuffling. In Garage music it ain’t so much about making the ‘biggest drums’ or ‘that 200 Hz boosted snare’. It’s mostly about how the drums roll and shuffles throughout the tune and I kinda like that more. It drags you into the tune and it just continues dragging you further and further and contributes with feeling lost which I really like.

Also a thing I love to do when I make beats, is that I try to ‘kill’ most elements in them – kicks, percs, hats, snares etc – so when it comes together with the melodic pieces and vocal-cuts, it just unites so greatly and becomes a music that tries to fight through the composition, even though its a bit broken, tired or sad. Just like in those times when you’re a bit moody or go through some rough times heartbroken.

DB: And the washes/ambience/ambient sounds for these… did that come first then the beats or other way round?

A: Actually I mostly start a tune with making the drums. Then comes the actual melodies, ambient pieces, vocal-bits and whatsoever but I almost always do the drums first really.

I find it easier to stick to a structured composition when I start making the drums which doesn’t necessarily have to be a good thing, but at least that’s how it works out for me. My workflow is really unpredictable though, so it’s difficult for me to say how both ways lead to different outcomes ha! They might is all I can say.

DB: Who are ten influences in music?

DB: What about other art forms? Painting, writing, films…

A: I really like art and paintings, specially the darker and moodier ones. I love Edvard Munch’s anxiety-series and James Abbott McNeill’s Nocturne-series. Some of those paintings are so moody it’s ridiculous but it actually inspires me to write tunes at times. I really like the danish artist John Kenn Mortensen’s post-it note-art as well. Some of those bits he does reminds me a lot of the anixety I deal with in different situations. I don’t know why I love all these moody pieces to be honest ha ha. I guess I’m just kind of a moody person.

I love playing indie/horror games. I fell absolutely in love with games such as Amnesia: The Dark Descent and Limbo and I can just play these games again and again. When it comes to films I really like the Lord of the Rings & The Hobbit films. I like movies such as Cloud Atlas, Shutter Island and a lot of horror movies in general. Actually most of my sampling comes from OSTs from movies like these.

DB: What would you like to do for the live arena?

A: I’m currently working on developing some sort of video/graphical type of thing to put on a big screen as I play, so hopefully I’ll get to try that out sooner or later. I’m not sure if I’d play my own material only or a DJ-set with other tunes too yet. I guess the time will show. I really want the audience to have an emotional or intimate experience when they see my shows though, so that’s surely something I’m gonna work towards achieving when it comes to playing live.

Right now I’m just keeping my head down and trying to focus on finishing my debut album which hopefully will come out later this year. There’s not really much to say about it yet as it’s still being produced. All I can say is this album will contain tunes that are similar to the Begone EP and tunes that points in a different direction and may be on a more experimental level.